Flash flooding caused by the tropical storm Alex wreaked havoc in Florida, with water quickly rising in the lower section of the roads. However, Miami residents tried to make the best out of the situation, as shown in many viral videos shared on social media.
16 photos

Miami residents don’t seem to mind the flooding caused by tropical storm Alex. On the contrary, they caused a flood on their own on social media, where they uploaded videos of Floridians doing crazy things in the streets. We’ve already seen a Chevrolet Corvette driving on a flooded road like an amphibious car. Still, we certainly weren’t prepared for the flurry of viral videos that followed.

Watching the videos below, you will see plenty of floating cars, some of them still kicking and some of them already dead. The funniest thing is when a young lady pops out of a BMW sunroof, all wet and barely covered in a club dress, trying to shove the sportscar out of the flooded area. Other vehicles speed past her in the water as high as the top of the wheels, making waves that threaten to take away the revealing dress.

A Corvette C7 moves through the water, leaving the cameraman baffled: “it’s a Corvette, what are people doing?” Seconds later, an Infiniti stalls in the middle of the water, although other cars continue to drive at speed around it. People seem to completely disregard the flood water as if their vehicles would be submarines or at least waterproof.

We’re sure one can find plenty of such videos on the internet, especially as South Florida has more than six million residents. But few videos are probably as entertaining as the one shared on Instagram by the user hankcarp. An inflatable raft carrying three people is hanging at the back of an unspecified pickup truck while powering through the water. Music booms while a wakeboarder sweeps in and out of the picture, crisscrossing the streets of downtown Miami. Yeah, life is crazy in Florida, but no less fun. 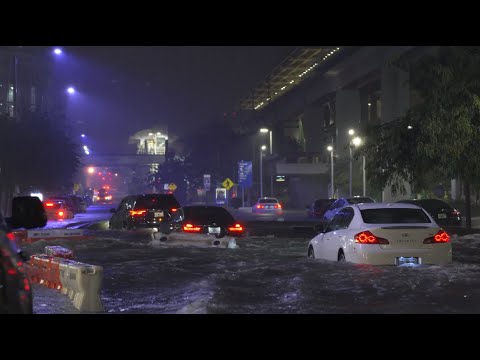