1 Car Falls Off Raised Bridge, Shows Life Is Not Like Grand Theft Auto

Drawbridges are safe as long as everyone sticks to the rules, but mistakes happen, and things can go wrong with this kind of infrastructure when that happens. A recently-revealed video that dates back from October 2021 showed that a driver who entered such a bridge right as the barrier closed behind his car faced vehicle damage and risked his life.
7 photos

The video in question was obtained after news channels in Florida began asking authorities about recent incidents with drawbridges. As WPTV news Channel 5 explains in its story, it all started after a 79-year-old woman died after falling off a drawbridge that was raised while she was crossing it. At the time, the bridge attendant claimed they did not see her.

In this video below, an unidentified driver gets a lifetime's worth of scared after entering the bridge in the last moments before the access gates are closed.

The video itself was recorded by the bridge's monitoring systems, and then it was sent to West Palm TV by representatives of Palm Beach County following a public records request addressed to the county. The operator who was at work the day the video below was filmed is no longer an employee of the company.

Drawbridges in Florida are owned by the state's Department of Transportation, but employees who operate them allegedly come from a third-party company. The latter refused to comment on the situation with the TV network, and Florida's DoT had a similar response regarding the refusal, as they preferred to wait for the result of the investigation.

The problem in question is that drawbridge operators do not have a clear view of the entire bridge from their chairs, even though the camera system should help them get a full view of the bridge before raising it. Moreover, the rules say that the operator is responsible for checking the bridge to be clear before raising it, which may not have happened according to the procedure here.

It is believed that the situation could have been avoided if the person who was operating the bridge had managed to check the entire surface of the bridge from the dedicated viewing area of the office. However, the former employee told media representatives that there are blind spots on that bridge in Lantana, Florida.

These bridges have an emergency stop button, which operators are allowed to press in case they see or hear something wrong in the process of raising the bridge.

Somehow, the silver sedan did not manage to attract enough attention, but it also showed that these bridges require extra failsafe in place to prevent any other deaths or injuries from occurring. 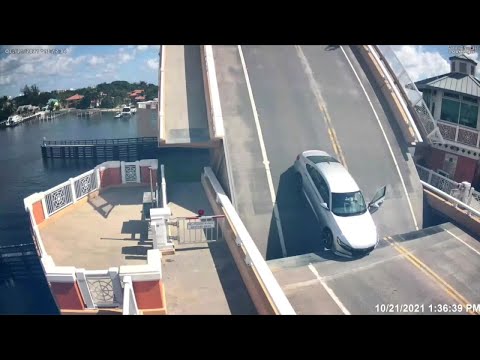