1 Formula 1: Drive to Survive Will Keep On Going – Confirmed for Season 5 and 6

3 Miami GP Has a Fake Marina, Dry-Docked Yachts, Pretends It Does Not Matter

This weekend will host the inaugural edition of the Miami GP. While the track features fake water and a fake marina, some of the drivers got to enjoy a bit of real water from The Sunshine State. Since they are Grand Prix racers, they did not go for a dip in the lake, but went racing instead.
11 photos

While Red Bull's previous Miami-related stunt involved Checo, this time, the team got Max Verstappen and Yuki Tsunoda in Red Bull and Alpha Tauri branded V8 buggies that are referred to as "swamp cars." They are not the only ones to race, as several Red Bull athletes are involved, and we are not going to spoil the video for you by revealing the winner.

What we can disclose though, is that these swap buggies come with V8 engines that provide about 900 horsepower. They have a two-speed transmission, a clutch, and there are no brakes. We do not know about you, but this sounds like an exciting race already.

Professional wakeboarder Parks Bonifay is here to help guide Max Verstappen and Yuki Tsunoda into the fascinating world of swamp buggy racing. It is the kind of thing that some might say that can only happen in Florida, but there probably are a couple of places in the world where something similar might happen.

Bonifay designates himself as the video's Florida man, and you can see him do some exciting stuff on water that needs no explanation. Our soles hurt a bit just after watching the video, but we can attest that it looks damn cool.

Now, back to swamp buggy racing! The two Formula 1 racers are joined by Supercross champion Jett Lawrence, along with skateboarding expert Zion Wright, and it looks like everyone had genuine fun.

As Scuderia Alpha Tauri's official YouTube account noted, they "came for the Miami GP, but got hooked by Swamp Buggy Racing." Sounds legit to us, and we like the idea of having athletes from one sport compete in something entirely different. 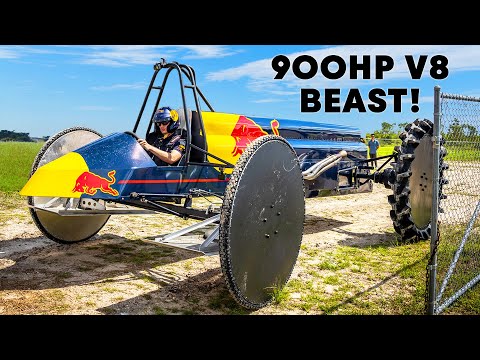