5 2023 Chevy Corvette Z06 Could Use Magnesium Transmission Casing, Possibly More
Up Next

With the debut of the 2023 Corvette Z06, let's take a quick look at how it makes 670 naturally-aspirated horsepower.

Flat-Plane Crankshaft: What Makes the New Corvette Z06 So Amazing?

Even at a distance, car enthusiasts know the sounds of an American V8. A deep growl that makes great torque and usually taps out after 6,000 rpm. On the other hand, a screaming Italian V8 is quite docile below 4,000 RPM as it builds into a screaming crescendo above 8,000 rpm. It's not exhaust or displacement that dictates how your power is delivered. Instead, the differences start at the very core of the engine. Look at the massive counterweights on this traditional Chevy LS crank:

There is more than one way to skin a cat, and there are two ways to build V8 engines. American cars have traditionally used cross-plane crankshafts. This means the crank has four pairs of two cylinder each. This works great because the engine is easily balanced while making great low-end torque. So much so, that American engineers didn't have to worry about screaming RPMs.

Italian sports cars were born on the race track, and they have a love-affair with saving weight. A flat-plane V8 is the exact opposite of what Americans are used to. An Italian V8 is essentially two four cylinder engines that happen to share the same engine bay. Because each cylinder bank acts independently, the crankshaft doesn't need the heavy counterweights we're used to.

Up until a few years ago, most automakers shunned them for several reasons. Because you have little power below 4,000 rpm, the driver is forced to constantly shift the transmission to keep the engine screaming. Single-clutch automatics tried to make this intuitive, but even the best E-gear and F1 transmissions are incredibly inefficient. The internals of the new 2023 Corvette Z06 are the lightest and strongest of any American car. Lighter crankshafts rev much faster, and they are much more stable at high speeds.

You can't deny the fact that electric cars are the future. That's why every automaker is pulling out all the stops to make the last generation of V8 cars their most exciting. Flat-plane engines are smaller and lighter, and that's why we've seen engine sizes dropping. Corvette Racing dropped their 7-liter cross-plane V8 in favor of a 5.5-liter flat-plane. Despite the smaller displacement, the flat-plane allows for fuel savings down low and incredible power above 8,000 RPM.

Reddick Brown Ford (Nashville, TN) allowed me to drive a Shelby Mustang GT350R for a week, and it changed my perceptions of what a V8 is capable of. Being an old-school hot rodder, I assumed it would be a lump at low speeds, and at first it was. But once I learned to keep the car above 5,000 RPM, it was more fun than a barrel of monkeys. It is more about the experience, as the sounds of a screaming engine will make you, smile- It's satisfaction guaranteed!

McLaren shocked the world when they returned to V8 power in 2011. Everyone realized that dual-clutch + flat plane crankshaft = incredible power. Germany took notice, and responded with the Porsche 918 Spyder along with the latest Mercedes-AMG Black Series. Now that Chevrolet is onaboard, the traditional American cross-plane V8 could be relegated to trucks and commercial duty.

So what's the downside? Unlike traditional V8 engines, flat-planes are not balanced. We all know that 4-cylinder engines shake at idle, now take those vibrations and double them. But since they can rev to redline in the blink of an eye, you will forget this minor annoyance in a few minutes. The reason why big automakers didn't build them before is because they are more expensive. The differences in these crankshafts is night & day, but the science behind them is even more interesting. So check out this great description by Engineering Explained and stay with us for al your automotive insights. 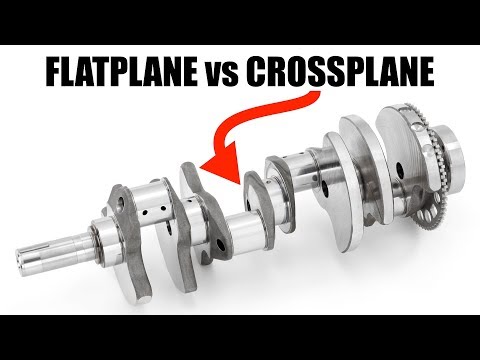