4 Airbone in an Unlikely Way: 65-Tons Plane Lifted by Cranes after Crash

5 The Faulty Carburetor caused Harrison Ford's Plane Crash
Up Next

Daniel Patrascu
Airplane crashes are by definition some of the scariest types of disaster of all. Sure, they are rare, but when they do happen, chances of anyone making it out alive are very slim. Slim, but still there.
4 photos

In May 2019, a Sukhoi Superjet 100 operated by Russian airline Aeroflot crash-landed on the Moscow Sheremetyevo Airport after being hit by lightning shortly after takeoff. Of the 78 people on board, 37 lived.

What they went through was probably incredibly scary, and testimony to that is the horrific video released this week by the Investigative Committee of the Russian Federation, the country’s main federal investigating authority.

The image you as the main photo of this article is not of the airplane after it came to a standstill on the runway. It is a capture from the video posted below, and is of the airplane while still in motion. Sideways, and engulfed by flames.

The accident is somewhat still under investigation, and it’s not yet clear why the lighting strike, which is not that uncommon in the aviation industry, caused damage to the plane’s electrical system and prompted the pilots to request an emergency landing.

For some reason during the maneuver, the airplane hit the runway and bounced back up, coming down even harder and losing its landing gear. That sent it sideways across the runway, with flames engulfing the entire rear end.

A good portion of those on board managed to exit the plane, although more than half did not. The fire was put out roughly 45 minutes after the crash landing.

In the aftermath of the crash, investigators said they found no evidence of a malfunction following the lighting strike, and have accused the pilot of failing to follow the rules and procedures.

The video released this week is posted below. View with caution, as some viewers might consider it disturbing. 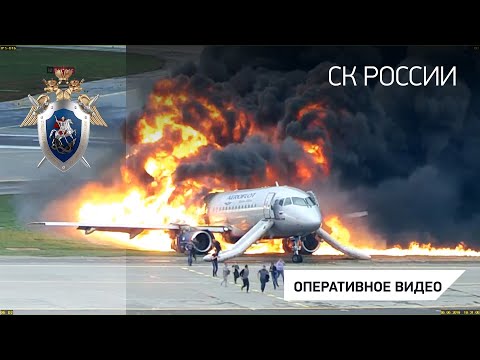