1 Rare VW Beetle Spent 52 Years in a Junkyard, Gets Rescued for Full Restoration

2 1969 VW Beetle Is a Distant RX-7 Relative, Should Not Be Underestimated

Vlad Radu
The modern iterations of the Beetle were never a success for Volkswagen, no matter how hard the German manufacturer tried to promote them. They would have been relegated to the back pages of automotive history books if it weren’t for the insane LSR, an A5 variant on steroids that managed to attain a mind-blowing high-speed run at Bonneville Salt Flats in 2016, becoming the fastest Bug ever built.
12 photos

Long before “fast” and “Beetle” could be used in the same sentence, the most loathed person in the history of humanity, Adolf Hitler, ordered the creation of a cheap and simple mass-produced vehicle that could help his country rise from the ashes after the First World War.

This project for a people's car (Volkswagen in German) based on a 1920s design by ethnic Hungarian engineer Béla Barényi was handed down to Ferdinand Porsche and his Stuttgart-based company in 1934.

After building several prototypes, the final design was unveiled in 1938, going into production shortly after. Officially dubbed Type 1, it was the first Volkswagen model ever built and it became the people’s car not just in Germany but all across the globe in the decades that followed. Without any major modifications and based on the same 1938 platform, the Beetle was manufactured until 2003, with well over 21 million units being sold.

In 1997, VW introduced a completely redesigned model called New Beetle but, except for the nameplate and an exterior design that was loosely based on the original model, it had little in common with its iconic predecessor. Based on the A4 platform shared with the Mk4 Golf or Mk1 A3, it was far from a cheap and reliable people’s car, so it was never a resounding success.

However, this iteration saw the birth of the first fast Beetle, the limited-edition RSi, a four-wheel-drive pocket rocket powered by a 221-hp VR6 engine. It could accelerate from 0 to 60 mph (97 kph) in 6.2 seconds and reach a top speed of 140 mph (225 kph).

In 2011, the German manufacturer released the third and final generation, but a high-performance model was never on the road-legal menu. Several Rallycross versions were introduced, the coolest of which was the 560-hp Beetle Supercar, but these factory-build racers did little to improve the standard model’s mediocre sales.

Before pulling the plug on the modern Beetle, VW made a last-ditch effort to promote its performance potential by creating a unique one-off capable of achieving a top speed of more than 200 mph (322 kph).

The project was handed down to Volkswagen of America who recruited Bonneville veteran Tom Habrzyk and his California-based THR Manufacturing to help them develop the car. They started with a stock R Line model which was stripped down to the bare chassis and rebuilt with a record-breaking performance in mind.

The goal was to take it to the famous Salt Flats and set a new official record for the Gas Coupe class. Since this record-breaking run needed to be sanctioned by the Southern California Timing Association (SCTA), all the upgrades had to be performed in accordance with the official G/BGC rules.

This meant that limited alterations could be performed to the body which remained surprisingly stock, save for an air dam, a set of special wheels and tires as well as a pair of brake parachutes.

THR upgraded the Beetle’s 2.0-liter TSI powerplant with forged pistons and conrods, aggressive camshafts, a ported cylinder head, custom manifolds, a high-performance ECU, and two capable turbochargers, instead of the stock engine’s lone, tiny unit. Thus, the output was increased from 210 hp to 543 hp, with torque peaking at 421 lb-ft (571 Nm).

Other modifications included a revamped suspension system and a limited-slip differential to improve traction while a safety package added a roll cage and a race-spec bucket seat with a five-point harness to protect the man who would sit behind the wheel.

Believe it or not, VW didn’t enlist a professional racing driver for the job and chose to give this task to Preston Lerner, the famed automotive journalist who, to be fair, is no stranger to the world of motorsport, having competed in several events during the years.

In a wonderful Automobile Magazine article from February 2017, he details the fascinating experience of chasing this unique record. The first attempt came in the fall of 2014 but during the second of three official runs, while doing about 170 mph (273 kph), the rabid four-cylinder gave up on him. It couldn’t be repaired on-site, so the record-breaking challenge had to be postponed.

According to Lerner, it was too late in the year to schedule another attempt and because of unfavorable weather conditions, the team couldn’t return in 2015 either. They finally managed to give it another go in 2016, during the Speed Week festivities with another driver at the helm but failed to go over 200 mph again.

Lerner returned behind the wheel a month later and achieved an average speed of 205.122 mph (330.111 kph) over a flying mile. However, to make it official, the car had to perform a second pass, a task made impossible by the water pump which failed during the first run.

The car was repaired in the following weeks and was given to another journalist by the name of Thomas Geiger who drove it past the 200-mph (322 kph) mark again, on the El Mirage speed course in Southern California.

Although it never set a new Gas Coupe record at Bonneville, the stock-bodied LSR with its troublesome yet potent four-cylinder became the fastest Beetle ever built, a title it still holds today. You can take a virtual tour of this amazing machine in the video below posted on YouTube by Thomas Geiger but be warned that the commentary is only available in German. 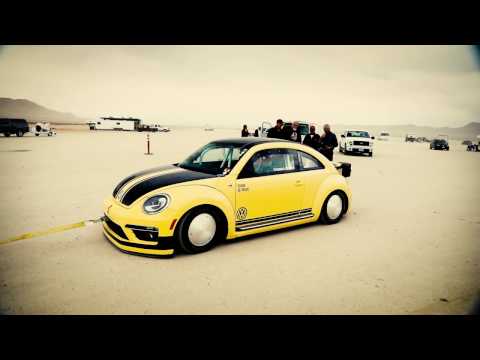