Just a couple days ago, on November 19, the Fisker factory in Graz, Austria, officially began producing the Fisker Ocean for customer deliveries. While the first edition the Ocean is completely sold out, production will be limited to just 300 in Q1 but ramp up to 42,000 by the end of 2023.

The Magna Steyr factory Fisker contracted with to build its flagship all-electric five-passenger Ocean SUV is the same factory that produces the Mercedes-Benz G-class, the BMW 5-series, and the Jaguar E-Pace and I-Pace, as well as the BMW Z4 and Toyota Supra. Consumer expectations are high with regard to quality, and it remains to be seen if the quality level of Ocean compares with the aforementioned brands.

In the wake of the commencing production of its Ocean SUV, California-based Fisker has released a time-lapsed video showing some details of the process.

At first glance, during the construction of the Ocean's stamped sub-frame, you will notice that it appears to be 100% automated with a team of robots placing components into jigs and the sub-frame panels itself and riveting and/or sonically welding components into place as the frame takes shape.

Inner panels are constructed in like fashion and fitted onto the sub-frame. At the 30-second mark, you can see a whole battery of robots converge to weld the sub-frame together.

Once the sub-frame has taken shape, it is elevated to another level of the factory, where we finally see humans involved in the process. They prep and fit outer body panels on the Ocean and seemingly perform fit and function quality checks. It is quite interesting to see work being performed on the vehicle as it moves from zone to zone.

From there, the body appears to go through a gauntlet of automated optical inspections as it travels into the painting area. At the 1:15 minute mark, you can see the application of what is likely to be an electrostatic primer coat before moving through some sort of curing process.

The body is then coated in its primary finish and clear coat before being led through a lengthy oven for curing.

It then enters the next phase of production as a robot affixes the roof-top solar panel in place, and a team of workers converge to remove the doors and install the necessary components, such as handles and electrical components. Automation, at this point, has given way to the human touch as the interior begins to take shape.

Perpetually in motion, the dash, console, and seats are installed on the fly, followed by other electronic components, the infotainment screen, steering wheel, and windshield. The body is then fitted atop the Ocean platform, already outfitted with axles, motors, brakes, and the complete drive train.

Tires and wheels are installed before the Fisker Ocean goes through a battery of diagnostic tests performed by a team of quality control engineers. Doors are re-installed by a team assisted by robots, the hood is installed, and the completed Ocean Fisker is ready for delivery.

What is starkly evident in watching the video is the choreography of the robotic process as well as that of the team of workers who work without seemingly wasting any movement. Of course, the video is just a snapshot of the primary production line, and many other things need to come together to reach the line.

It is also hard not to be impressed by the cleanliness throughout the facility as you see the progression of the production process taking place. It is not clear how long it takes to make a single Ocean, but the process is impressive regardless, and the video certainly helps put the process into perspective. 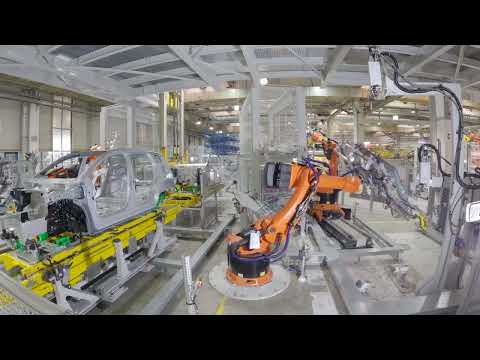