2 We'll Have No Goodwood Festival of Speed This July

5 Quadcopter Racing Series Takes Off from Goodwood in Airspeeder Demo Flight
Car video reviews:
Up Next

LaFerrari Replica Is a 1992 Acura NSX Crying for Help

You could think of the upcoming SpeedWeek as a cross between the famous Goodwood Festival of Speed and the Goodwood Revival, but the setting is ripe for so much more. This is because due to social distancing restrictions the organizers decided the October car enthusiast party will be held behind closed doors. And that means we should expect serious action that would transcend all boundaries – you should interpret this into even larger shenanigans that most likely involve all areas, including those usually reserved to the public.
171 photos

Goodwood is keeping fans on their toes and has decided to release a little snippet of what’s coming, courtesy of Toyota’s GR Yaris and professional rally driver Kris Meeke. Highlighting things that are certainly bound to happen during the SpeedWeek, Meeke is taking the GR Yaris all over Lord March’s property without anyone stopping them.

The teaser is short and concise, but we can see the little Japanese rally-inspired bombshell loves playing Gymkhana-style on and around the Goodwood Motor Circuit. Not exactly its natural element, considering its rallying inspiration but we have a feeling the SpeedWeek is all about trumping expectations and putting some of the greatest cars from now and yesteryear in uncomfortable situations.

While named the Goodwood SpeedWeek, the event is not actually taking place over the course of a week and instead has been scheduled for three days – October 16th, 17th and 18th. The organizers promise a closed-doors extravaganza that was specifically developed for broadcasting purposes.

Best of all, fans will have the opportunity to see it all free of charge – and on a global level on the Goodwood Road & Racing social media channels and a range of partners.

The Goodwood Motor Circuit will host, among others, a historic battle across ages between some of the most valuable cars in the world – driven by a star-studded cast. Another feature will see an epic rally competition arranged on, over and even under the track – virtually anything can be arranged as there are no spectator safety worries this time around.

Another reason for the GR Yaris / Meeke teaser emulating the iconic Gymkhana-style footage in this new teaser is that Goodwood is preparing the first-ever “Goodwood Gymkhana” for SpeedWeek.

Classic Festival of Speed attendees should have no fears the new event is all about mindless mischief, though. The organizers also promise all the major races from the Revival and the FoS will lend its traditional Timed Shootout – although for this occasion alone it has been transplanted on the historic Goodwood Motor Circuit. 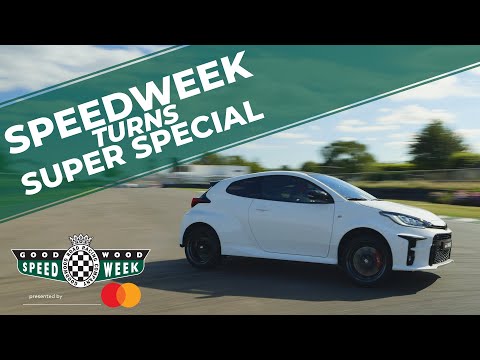