Home > News > U-turn
Aurel Niculescu
Has anyone thought about treating a Toyota Prius hybrid to a Honda K-Series engine swap? If they did, they’re probably going to lock up the idea in the deepest, darkest corners of their minds and throw away the key after viewing this video coming from Emelia Hartford, a rather well-known car vlogger.
17 photos

In case the name Emelia Hartford doesn’t ring a bell, we can tell you she has a passion for three things – modifying cars alongside a bunch of friends, blowing up the engine of her twin-turbo C8 Corvette, and generally doing anything she can to crank up those views.

By the way, she also likes to hear herself rant about all sorts of uninteresting stuff – which makes it kind of hard for us to extract valuable pieces of information when checking up on her latest vlog progress. On this occasion, though, we’ve stumbled upon her first drive with the Honda K-Series swapped Toyota Prius, and (sadly) we couldn’t help but stay until the very end.

We were secretly hoping she will blow up or at least light up the engine on fire like she previously did with the C8 Corvette, but we had no such luck. Instead, let us help you skip through the mumbo-jumbo (which also includes some paid promotion) and give you the main chapters.

So, everything starts when she’s outside the shop to check up on the “Pronda’s” (that’s the car's nickname) recent progress, where she immediately comes up with the idea of outfitting someone’s Ford Crown Vic with a couple of turbos.

Never mind that, even she knows it’s a bad idea. Then we’re off to a first start which “technically it’s a second start,” according to one of the guys. Actually, “it’s a first start with the new throttle body and a working clutch pedal,” and the attempt naturally fails (jump at the 6:25 mark).

After more shenanigans, the real action kicks off at the 14-minute mark when she first moves the car, even with that clutch pedal looking seriously unwieldy.

The actual driving part is available from the 17:16 mark (see, we told you she likes to waste time), when the formerly silent Toyota Prius hybrid turns into a Honda K-Series swapped monster that’s loud and doesn’t drive very fast because it almost doesn’t have any brakes at all!

By the way, we do see where she’s going with this “world’s first” K-swapped Toyota Prius as her turbo kit that was ordered on eBay neatly arrives at the end of the vlog, but we still think the Hellcat Prius is light-years better! 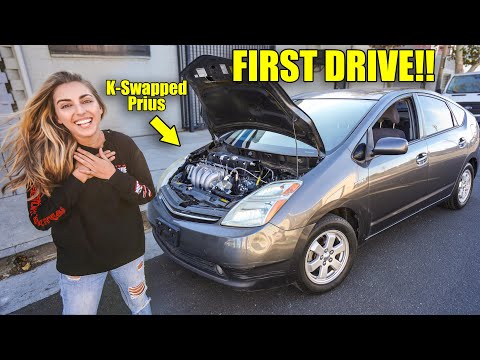