1 1,887-HP Rimac Nevera Reviewed in the Snow, You've Been Saying Its Name All Wrong

2 1,914-HP Rimac Nevera Is Done With Winter Testing, Customer Deliveries Up Next

4 CarWow's Mat Watson Crashes Multi-Million Dollar Rimac Nevera, No One Gets Mad About It

Rimac has provided a glimpse into the assembly of the Nevera, as car #1 recently rolled off the assembly line. As a matter of fact, it is known as #000, and it will remain in the possession of Bugatti Rimac to be showcased to potential clients, and used in all sorts of marketing campaigns.
7 photos

Finished in Callisto Green, with Graphite Vertex Wheels, and Sand Alcantara interior, it was demonstrated at last month’s Goodwood Festival of Speed, where it took on the famous Hill Climb.

Capped at 150 copies in total, each Nevera will be unique, with Rimac offering 36 different pre-defined finishes. On top of these, customers will have the opportunity to further specify theirs in three levels of exposed carbon fiber, various liveries designed in-house, and an “enormous selection of colorful leathers, Alcantara, contrasting accents, and metal finishes for the interior.”

Once completed, the electric hypercars will be delivered through the company’s global network that stretches from the United States and Europe to the Middle East and Asia, consisting of 25 dealers. Only 50 units will be put together annually, and the first year of production is already sold out. That means that around 100 examples or so are still up for grabs.

Named after the unexpected Mediterranean summer storm off the coast of Croatia, as that is where Rimac is based, the Nevera “unlocks the next generation of automotive performance.” It dwarfs some of the quickest vehicles on the planet in terms of straight-line acceleration, and that includes not only the Bugatti Chiron and its derivatives, but also the Tesla Model S Plaid. 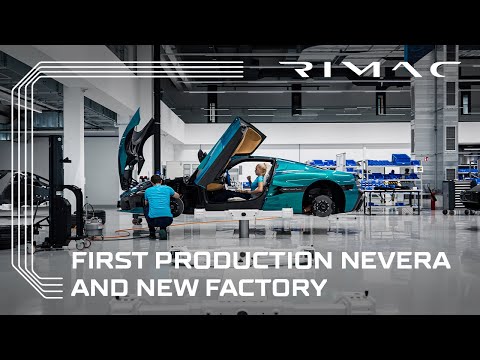