3 British eVTOL Claims to Have the World's Lightest Electric Powertrain, Flies at 200 MPH

The first man in the world to achieve a manned flight of an electric multicopter recently unveiled a tandem wing aircraft prototype, describing it as an eVTOL (electric vertical take-off and landing aircraft) that really works.
7 photos

Back in 2011, Thomas Senkel secured a place in history when he designed, partially built, and flew the first multicopter under the German e-volo brand. Later on, that company became Volocopter, which Senkel left in 2016. One of his complaints at the time was the inefficiency of the Volocopter aircraft in terms of range.

Teaming up with pilot/engineer Michael Kugelgen, Senkel gave birth to the eMagic Aircraft, for which they now have a working prototype, called eMagic One.

According to its developers, the eMagic One design combines an aircraft with a multicopter, offering five times the range of a pure multicopter. The eVTOL has a length of 23.6 ft (7.2 m) and a wingspan of 25.2 ft (7.6 m). It has an empty weight of 562 lb (255 kg) and a maximum takeoff weight of 882 lb (420 kg). Its tandem wing configuration offers great flight characteristics, according to Senkel.

Its airframe is designed to be light, and all the components in it have been specifically made and optimized for the eMagic One.

Senkel was the one in charge of the electric drivetrain of the aircraft, while Kugelgen worked on the airframe of the eVTOL. A third member of the team, Moritz Pfletschinger, is in charge of software development and flight controller optimization.

The eMagic One has custom-designed props that are thin-bladed and have 7.3 ft (2.25 m) in diameter. It has a shock-absorbing carbon landing gear, two independent battery systems, and a flight time of up to 60 minutes. Speed-wise, the eVTOL can reach 105 mph (170 kph).

Right now, the eMagic One is just a prototype, a working one, as you can see in the video below, but the team is now seeking funding to take their eVTOL project further and develop a serial production aircraft. As Senkel stated for New Atlas, that one will be a three-seater suitable to be used as an air taxi. So far, the duo has financed the prototype out of their own pockets, but they require an investment round to carry on with the eMagic. 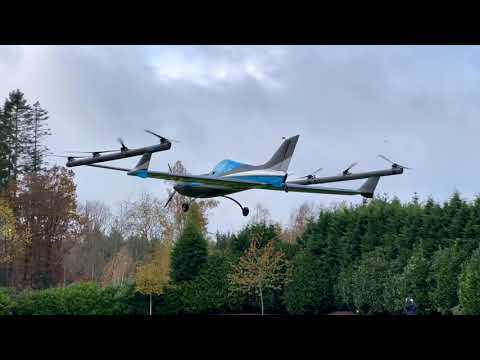