1 US Electric GrandPrix to Debut this July
Coverstory 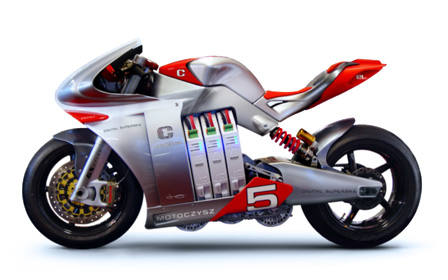 The world’s first Digital Superbike was recently unveiled, shocking the public not only with its design and paintwork, but also with the Apple iPhone dashboard.

Unfortunately, details of how the iPhone has been integrated in the MotoCzysz E1pc were not revealed, but it seems that it controls all of the electric superbike’s instrumentation.

The iPhone dashboard can track location and speed and features a built-in GPS functionality that is able to measure various performance metrics including lateral G forces, maximum speed and acceleration.

Michael Czysz said for MCN: “In the latest video [which you can see below] the bike went from 0–120 in less than 11 seconds and that was with a very slow, 3 second roll on. Plus we were running only 75% of our race battery pack."

The E1pc can reach up to 120mph in just 7-8 seconds, just by using the energy from 10 batteries and three motors. That is as fast as a Suzuki GSX-R1000 and a bit faster than Yamaha’s V-MAX. 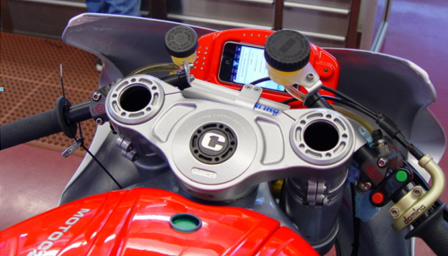 “In less than five months we took a suggestion and turned it into a motorcycle. A motorcycle that is unlike anything I have ever ridden. No gas, no oil, no clutch, no need to even warm up the engine – no engine,” Czysz continued.

"Gone is the age-old ritual of rhythmical throttle blips that can audible seduce a motorcyclist into a pre-ride trance – now your bike waits for you. Enter what may be the next big thing in motorcycles; invisible, nearly silent and magically linear power.”

Mark Miller will ride the E1pc in the world’s first zero carbon emission grand prix, TTXGP, which will be held on June 12, 2009 during the Isle of Man TT. The first Digital Superbike will compete against Mission One, and Brammo’s Enertia.