5 Jeff Bezos’ $500M Megayacht Will Be Pelted With Rotten Eggs If He Dismantles Bridge for It
Car video reviews:
Up Next

It’s been a rough few months for luxury shipyard Oceanco and its most recent build, Project 721 or Y721, a $500 million sailing megayacht they’re building for none other than Jeff Bezos. But all that drama seems in the past now, and the world is getting a first good look at the source of it all.
10 photos

Once delivered, Y721 will become the world’s largest sail-assisted yacht, Oceanco’s biggest build to date, the biggest yacht to be built in The Netherlands, as well as one of the most expensive and luxurious vessels out there. That’s a lot of records broken by merely existing – and Y721 seems poised to set a new standard in terms of size and looks, as well.

Hanco Bol of Dutch Yachting, the same guy who trailed the megayacht as it was floated at the Alblasserdam shipyard and towed to Greenport, where the masts were set, was able to get close to the vessel for what is the first proper look at it in its final form. You can see the video at the bottom of the page: it’s not Oceanco-approved footage, but it was filmed in a public area where permission to do so wasn’t needed. And it’s gorgeous footage, displaying for the first time the scale of the yacht, both in length and height.

Y721 has a total length of 417 feet (127-meters) and is rigged as three-masted schooner, with each mast measuring 230 feet (70 meters) in height. The same masts were the cause of recent controversy and outrage with the people of Rotterdam, as Oceanco had requested permission to temporarily dismantle the historic Koningshaven bridge so the masts would fit. The people of Rotterdam were not pleased – and they made sure they were loud about it.

Faced with the possibility of even more civil unrest and threats of egging, Oceanco eventually opted to cancel the request with the city. It then moved the vessel in the dead of night, by a longer and less used route, bypassing the bridge altogether and avoiding unwanted attention. Well, as much as a vessel of this size can avoid attention.

It’s safe to say, given its size, its gleaming dark hull and those gigantic masts, attention is something Y721 was born to generate.

Details of the project are still kept under wraps, but trade publications note that Y721 will be accompanied by a matching shadow yacht that will carry tenders, all manners of toys, and supplies, none of which would have any space on the mothership. That support vessel is Damen Yachts’ custom YS 7512 model, a 246-foot (75-meters) vessel that offers accommodation for as many as 45 people and is being described as a proper superyacht on its own. 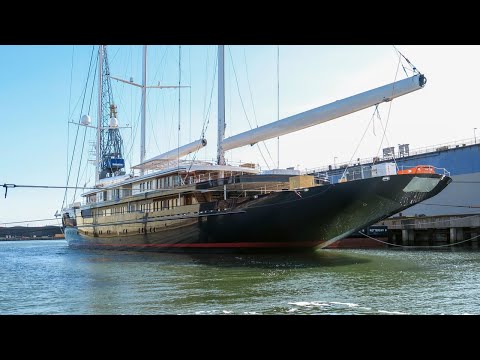