Home > News > Tuning
Gabriel Nica
In the last few years, there’s been an increasingly more popular trend out there, especially amongst German manufacturers that saw them declaring less horsepower than what their cars actually make.
1 photo
Of course, BMW and Mercedes-Benz were the first to be suspected of such practices, the latter being one of the biggest cheaters out there, the dyno runs various people did with their cars showing huge differences both in HP and torque numbers.

Usually, the numbers a manufacturer releases as official are recorded at the crank of the engine and not at the wheels. Therefore, your car actually uses less power to get around due to the transmission losses (usually rated at 15-20 percent). With BMWs, it’s quite often to get the official numbers at the wheel, which means readings at the crank would show up to 20 percent more power than expected.

With the M235i people asked themselves the same question: what’s the actual power the new 2er makes at the crank and at the wheels? Only one way to find out: get one on the dyno.

The guys from European Auto Source did just that as soon as they got their hands on one of these Coupes. The stock car recorded 307 WHP and 322 lb-ft (436 Nm) of WTQ, pretty close to the official numbers. We should also mention that the car was using 91 Octane fuel. Check out the run in the video below. 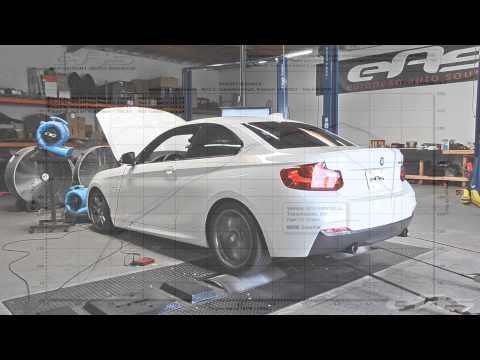