1 McLaren Bringing Its Finest Supercars to Salon Prive, Test Drives on the Menu

First 2022 McLaren Artura Crashed, and It’s Not a Pretty Sight

Home > News > U-turn
Elena Gorgan
McLaren introduced its first hybrid supercar, the Artura, in the first quarter of 2021. Deliveries to the first customers are only now starting, but one Artura has already been crashed – and it’s just as painful a sight as you can imagine.
6 photos

For the record, all accidents are terrible. Even when no one is injured, as was the case here, they’re still terrible. This one, though, is making headlines because it is the first documented crash of the just-introduced Artura. Chances are this wasn’t even a production car that had been delivered to the owner, which adds another layer of “oh heck no” to the whole situation.

Video of the aftermath of the accident has popped up on the popular SupercarFails channel: apparently, it happened on a winding road in Spain, with the first indication being that the Artura driver lost control coming out of a turn and went into oncoming traffic, where it collided head-on with a BMW 3 Series sedan. The damage is considerable, but the video is too short to show the full extent of it. As per the report, no one was injured, because both vehicles were traveling at slow speeds.

As it turns out, the crash actually occurred a couple of weeks ago, in La Rioja. Details are not available, which is strange and might have something to do with the fact that this was presumably a McLaren press car. It’s wearing UK plate numbers with “WTC” on them, which is apparently used on McLaren press cars, along with “MCL.” Based on the blue paintjob, it could be that this is the same vehicle that raced at this year’s Goodwood Festival of Speed and that it was now being taken out on a test drive by a potential client. And the potential client crashed it.

To paraphrase some car enthusiasts, most are yet to see an Artura in person and someone had already crashed one, and it’s a real shame. 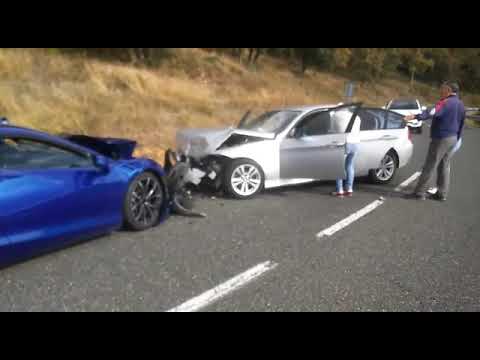