2 Lemur Tactical Drone Was Born of a Tragedy, It's the Invention of a 17-Year-Old

5 This Hybrid Drone Can Switch From Tethered To Untethered Mode During Its Flight
Car video reviews:
Up Next

Firefly Drone Is the Pickup Truck of the Sky, Can Carry Payloads of 100 Lb for Two Hours

With a massive payload capacity, long flight duration, and versatility to make it suitable for a wide range of applications, the Firefly heavy-lift UAS (unmanned aerial system) promises to be a radical aircraft meant to open a world of new possibilities and be an industry game-changer.
8 photos

Developed by California-based startup Parallel Flight Technology in partnership with NASA, this monster of a flying device is not your regular drone, but rather a flying, autonomous workhorse that weighs 120 lb (over 54 kg), measures 3 ft (0.9 meters) in height and has a 5 ft (1.5 m) wingspan. Its propellers are 102 cm (40”) long and the UAS is equipped with a 60V, 5000 mAh battery.

Depending on the payload, the UAS can stay in the air for up to seven hours, with an auxiliary fuel tank. It boasts of a two-hour flight time when carrying a payload of 100 lb (45 kg), which Parallel Flight Technology claims is ten times longer than any existing solution.

When it only has to carry 40 lb (18 kg), the industrial drone can fly for four hours, while with a payload of just 10 lb (4.5 kg), that flight time increases to seven hours.

And according to Parallel Flight Technology cofounder Joshua Resnick, as reported by The Mercury News, the Firefly would eventually be able to carry up to 1,000 lb (453 kg). Nicknamed the pickup truck of the sky, the aircraft can reach speeds of up to 100 mph (160 kph).

The drone has already been tested and proved it can be a great solution for fighting wildfires. It can deliver critical supplies, being able to navigate in zero visibility scenarios, which is something helicopters can’t do.

It can also be valuable for healthcare logistics, delivering medication, vaccines, medical equipment, defibrillators, and so on. Moreover, it can transform industrial logistics, making operations safer and more efficient.

Parallel Flight Technology ensures that it will have a beta-level aircraft ready for lift-off and will be delivered to customers sometime this year. We have no information on pricing at this point. 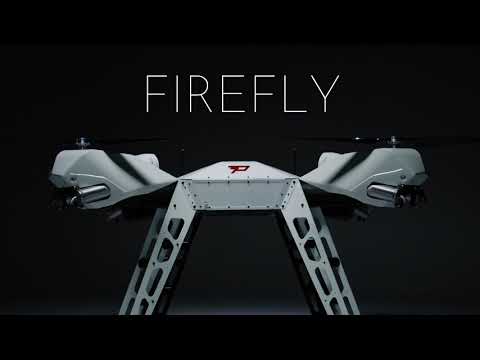