5 Razor's New Electric Kick Scooter Is for Both the Nostalgic and Modern Kid in You
Car video reviews:
Up Next

Fiido’s The Beast Is an Offroad e-Scooter and Go-Kart Combined, Awesome

When you’re trying to save words to describe a new product, finding a catchy name will do the trick. Meet The Beast.
7 photos

The Beast is the latest model from maker Fiido, and it’s a combination between an offroad e-scooter and a go-kart, capable of delivering unparalleled stability, fast speeds, solid range and, apparently, untold amounts of adrenaline-pumping fun. Or so we’re told.

Word about The Beast has been out for some time; even Fiido introduced it officially in November last year, as you can see in the video at the bottom of the page. That said, as of the time of writing, The Beast can only be ordered through a crowdfunding campaign, and it’s just gone live on IndieGoGo.

Fiido says that the e-scooter came to be out of an observation of a gap in the market and the need for a reliable offroad machine that could also be ridden at the race track. Naturally, we’re talking about a very specific niche of customers here, but Fiido is confident in the appeal of The Beast, which also boasts of being the first e-scooter with dual riding modes. So not only is this two-wheeler offroad-capable, fast and fun, but it’s also versatile. To an extent.

For offroad riding, The Beast will be used as a standing scooter, which allows for easier maneuvering over rough terrain. On the track, where the goal is to go as fast as you can, the rider can sit down, with their feet on pegs on the sides of the front wheel. The fact that The Beast has dual suspension and rides on 11-inch offroad anti-skid fat tires should make either riding mode relatively comfortable, though admittedly, comfort is not what you’re looking to get out of a ride on this thing.

Features also include dual hydraulic brakes, a wider footboard and a 720-mm (28.3-inch) wide handlebar to accommodate bigger riders, front and rear lights for maximum visibility on and off the road, and a removable battery that is also waterproof. The total weight of the e-scooter is of just 35.6 kg (78.5 pounds), which Fiido says is comparatively lightweight for a product of this kind. 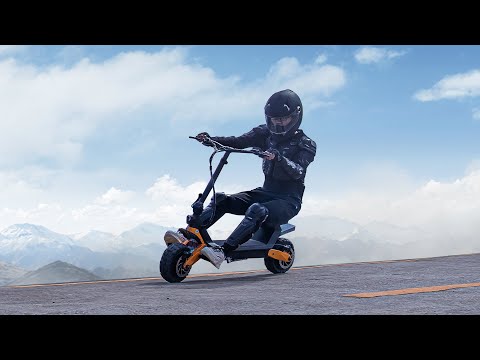