5 2024 Chevy Blazer EV Might Have Looked Cooler in an Alternate GM Design Universe
Car video reviews:
Up Next

2023 Honda Civic Type R Drops Its Boyish Ways; It's Now Mature and More Potent Than Ever

Thus, between 1963 and 1974, across the span of four generations, the Pontiac GTO acted as a catalyst for others to follow, chase, and surpass. Then, in 2004, GM thought it was gifting fans a cool fifth-generation version, though most of the latter had other opinions.

They did not mind as much that Pontiac went with a left-hand drive version of the Holden Monaro (the coupe version of the famous Commodore sedan) and sold it as a captive import. Instead, they did lament about fitting it with a bland, conservative design that did not appeal to the American public all too much, despite the classic coupe proportions.

Well, other people now think that styling is actually “timeless.” And one of them is Marouane Bembli, the virtual artist better known as TheSketchMonkey on social media, who decided it was high time for the fifth-generation Pontiac GTO to be “back from the dead!” Naturally, he revived the mid-size muscle car in his latest behind-the-scenes making-of video that is proudly embedded below.

And he did that with a few interesting twists and turns, beware. But first, as always, he loves to discuss the history, legacy, and design of the original model that will be modified according to his imagination. So, the actual redesign process of the model that was also sold as the Holden and Vauxhall Monaro, as well as the Chevy Lumina SS, kicks off at the 4:25 mark.

Once the CGI shenanigans kick in, there is much to be said about this “simple” resurrection, as the revived Pontiac GTO turns into something akin to a “Frankencar.” This is all because the pixel master decided to fit in a redesigned sixth-generation Chevy Camaro front end, reworked Acura Integra headlights, as well as the Dodge Charger hood and big, dark wheels. 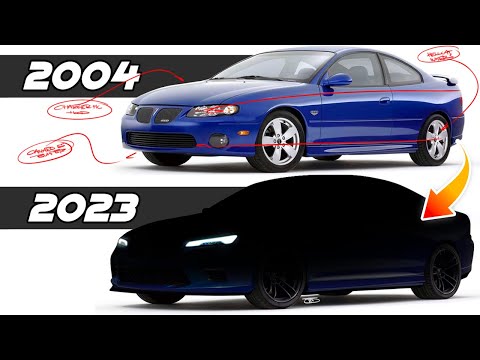