5 Mustang and Supra Battle for 6-Second Drag Supremacy, What's Your Favorite?
Car video reviews:
Up Next

Here’s a race that has the makings of an epic encounter even though you’re not staring at the usual drag racing suspects. Granted, taken separately, none of these small EVs has what it takes to be called a pocket rocket (save for the MINI Cooper SE, maybe). But when all eight models get together on an airport’s strip, marvelous (yet silent) things can happen.
43 photos

We didn’t give you the full names of the contenders for this atypical drag race in the title because we’d run out of space before getting to the third or fourth car, so let’s get properly acquainted to the roster, first and foremost.

The Fiat 500e is the latest to arrive in the ultra-compact EV segment, so it does get the honor of being called out ahead of everyone else. The Honda e combines retro looks with modern technology, comes with RWD, and has an average battery.

MINI’s Cooper SE keeps the go-kart feeling through and through – and anyone knowing the specs will place a bet on the British EV without thinking twice. Mazda’s MX-30 is the odd addition to the field, as it is larger than most small EVs; it's also the heaviest of them all.

Peugeot’s e-208 honorably represents the interests of the PSA conglomerate (is it too early to call it a Stellantis sibling to the 500e?). Then there's the tiny e-Up! that should not be overlooked, even though Volkswagen is now placing major bets on the ID. family.

Last but not least, the Renault Zoe and the smart EQ forfour represent two different philosophies. The French veteran is a great all-rounder, while the little German doesn’t have the technical assets to leave the convenient urban environment.

This video coming from the ThEVox Network channel on YouTube might seem crowded at first, but it’s so meticulously organized that all the action (including the quick presentation of each car, complete with nicknames) happens within the confines of just seven minutes. And, believe us, it doesn’t feel rushed at all.

Instead, the channel has placed in the description all the necessary timestamps for anyone looking to skip a beat or two. They’re also playing it safe as the drag racers were divided in two separate groups; no qualifiers and final head-to-head encounters in this video either.

In the end, all that mattered were the recorded times, and the results spreadsheet (embedded in the gallery) covers just about every figure anyone would dare to ask from these small representatives of the continuously expanding EV segment. 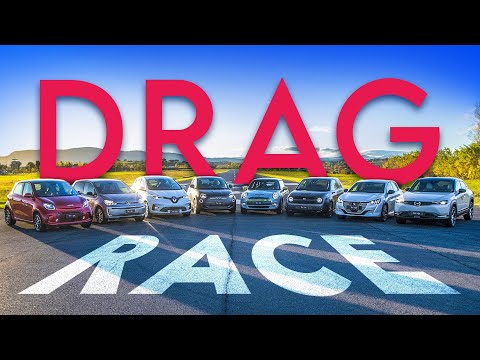