4 Ecclestone: "F1 Crisis is About Power" 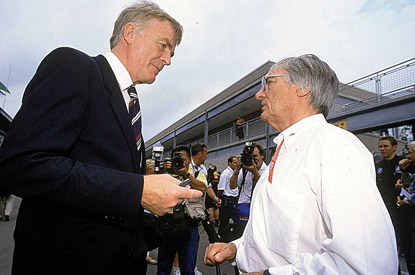 The International Automobile Federation (FIA) made it very clear that they will not back down in the ongoing dispute with the Formula One manufacturers. According to a latest press release from the governing body, the reason for that is because the FOTA are trying to control the rules and commercial rights of the Great Circle, something that is regarded as unacceptable by the FIA.

Not long ago, some Formula One “big guns” – Toyota and Ferrari in particular – forwarded the idea of teams becoming the main beneficiaries of the sport's revenues, as exemplified in all major professional sports competitions worldwide (the UEFA Champions League, the North-American professional leagues, and so on).

In addition to the teams' attempt to secure a bigger share of the F1 revenues – currently controlled by Bernie Ecclestone's Formula One Management (FOM) – the budget caps for 2010 is also seen as unacceptable by the manufacturers, as they argued F1 is not simply a sport where the best driver should win, but also where technology plays a big role in the game (which often comes with huge sums of money).

No matter what the subject of discussion is – between the aforementioned two points – the FIA stated it is in complete disagreement with the manufacturers. Yesterday's release states it loud and clear, while also pointing at the Ferrari's Luca di Montezemolo for being at the heart of the ongoing political crisis.

“In light of the success of the FIA's Championship, FOTA - made up of participants who come and go as it suits them – has set itself two clear objectives: to take over the regulation of Formula 1 from the FIA and to expropriate the commercial rights for itself. These are not objectives which the FIA can accept,” said the statement.

“Mr. (Luca) di Montezemolo promised to secure the necessary guarantees from the main car manufacturing companies (not to be confused with guarantees from the teams). He continued to promise this all through the winter, most recently at a meeting he had with the FIA's President on 23 February 2009. Not one such letter has been forthcoming – not even from Mr. di Montezemolo's own company FIAT.”

Read the entire FIA statement here, including several relevant documents that were attached to the yesterday's press release.