Ferrari vs Lamborghini vs Porsche in $1 Million Drag Race, Italians Get Trampled

I wonder if in 50 years from now, Lamborghinis, Ferraris, and Porsches will still be considered fast cars. All three companies are adjusting their strategies to cope with the new changes in terms of electrification, and I would dare to say that Porsche has the upper hand, considering its involvement with Rimac.
19 photos

Lately, we keep seeing more and more of these quarter-mile (402 meters) challenges, where Porsches seem to be unstoppable. With turbocharged engines and AWD, they also possess formidable grunt, and going into this race I was already concerned that neither of the two Italian supercars would be able to keep up. The Ferrari is a 488 Pista Piloti, a car that's not easy to come by if you haven't been racing with Ferrari.

The Pista Piloti sports a series of further upgrades as compared to the standard 488, upgrades that are derived from its race-spec siblings. This car had a price of about $521,000, but nowadays if you want one, do be surprised if you'll have to pay as much as $750,000 for a previously-owned vehicle. The twin-turbo, 3.9-liter V8 is good for 710 horsepower and 568 lb-ft (770 Nm) of torque. As lightweight as it may be, at 3,053 lbs (1,385 kg), it's only sending power to the rear wheels, which in today's race is going to be a disadvantage.

The Lamborghini Aventador SV is the second car on the list, and it's packing a naturally-aspirated 6.5-liter V12 that churns out 740 horsepower and 507 lb-ft (690 Nm) of torque. While the Aventador SV is more powerful than the 488 Pista Piloti, and it also has AWD, it's heavier than its opponent, at 3,472 lbs (1,575 kg). When it was brand new, this car had a price tag of about $528,000, which means it's slightly more accessible than the Pista Piloti.

Even before watching the video, you can't help but think that the 911 Turbo S is going to ace all of the runs, except perhaps for the rolling start. And at the same time, it's most likely that the Aventador SV is always going to be the last car on the grid. At least it wins the exhaust note battle though, hands down. As they engage in the first run, the Porsche does what it does best and takes the lead. The Ferrari is struggling with wheelspin at first, but as it gets up to speed, it overtakes the Lamborghini.

The 911 Turbo S is rolling on a different level and wins the first run, as the 488 Pista Piloti crosses the line in second place and the Aventador SV in third. It needed 9.7 seconds to complete the quarter-mile, while the Ferrari and Lamborghini were 0.8 and 1.2 seconds slower overall. They decide to change things up a bit, so a rolling race in a normal driving mode is up next.

Once again the Porsche takes the lead, and after a short while the Ferrari is back in second place, and from that point on, there are no changes in the ranking. They decide to have a re-run, but with the cars having their sportiest modes engaged. The starting point is up at 50 mph (80 kph). And we finally get to see the 488 Pista Piloti taking the lead, but by the time it's at 170 mph (273 kph), the 911 Turbo S reclaims its position as a leader and wins for the third time in a row.

The last test of the day is the brake test, and as the 488 Pista Piloti is the lightest car here, it should have a solid chance at winning. They're all going hard on the brakes from 70 mph (112 kph), and the Italian exotics can't seem to catch a break, as the German-built Porsche once again comes out on top, proving its superiority. 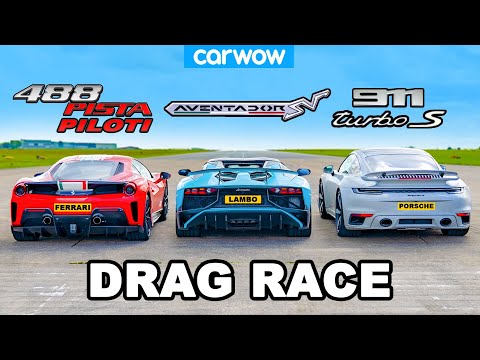