3 What Makes the Ferrari Scuderia Spider 16M So Timeless?

Vlad Radu
Designed by Pininfarina as a homage to the company’s longest-serving chairman, Sergio, this lesser-known Prancing Horse was initially a stunning windshield-less Barchetta. It then morphed into a far too conventional, limited-production model that was priced ten times higher than the 458 Speciale A it was heavily based on.
15 photos

For more than sixty years, Pininfarina and Ferrari went together like lightning and thunder. It all started in 1951, when the Battista “Pinin” Farina and his 25-year-old son, Sergio, met with Enzo Ferrari on neutral territory, at a restaurant in Tortona, a small town halfway between the two brands’ headquarters.

From that point on, Pininfarina handled the design, engineering, or construction of the vast majority of road-going Prancing Horses. The collaboration was so close that Pinin was once vice president of Ferrari, and Sergio later sat on the company’s board of directors.

The relationship lasted until the 2010s, with the F12berlinetta being the last series-production model to be stylized by the Turin-based design firm.

After Pinin died in 1966, Sergio took over the reins, and not only did he maintain the fruitful partnership with the legendary Italian carmaker, but also transformed the family business into a worldwide design and engineering powerhouse.

When Sergio passed away in 2012, his son, Paolo, along with the whole Pininfarina team, decided to pay their respects by building a bespoke driver’s car that would bear his name.

Known as the Pininfarina Sergio but donning Ferrari badges, the breathtaking concept was revealed to the public at the 2013 Geneva Motor Show. The work of leading designers Fabio Filippini and Luca Borgogno, it was built around the Ferrari 458 platform, but it sported a completely new carbon fiber body inspired by some of the most iconic models from Pininfarina’s past.

A windshield-less Barchetta, it featured a front fascia that nodded to the Dino Berlinetta Speciale prototype which was the first solo project undertaken by Sergio back in 1965. The overall shape of the car resembled the 1989 Mythos, whereas the rear end took cues from the 1967 Dino Berlinetta Competizione and the 1970 Modulo.

Extensively wind tunnel-tested, the bodywork was said to be 10% lighter than the original aluminum structure of the 458.

Similar to the Monza SP1 and SP2 that would debut six years later, the concept employed a so-called virtual windshield. It worked by deploying a stream of air at speeds of over 31 mph (50 kph) from a couple of vents mounted ahead of the dashboard. By doing so, the oncoming airflow was deviated over the cockpit without affecting the general aerodynamics of the vehicle.

As you would expect, the impressive show car was a hit among Ferrari enthusiasts, especially the wealthy ones who began enquiring about the potential of a limited production run.

Pininfarina and Ferrari eventually obliged and kicked off a production run of six units from 2014 to 2015. However, the coachbuilt Sergio that ensued ended up being far less spectacular than the original concept.

It retained a bespoke, full-carbon body with similar design cues but most of the truly unique features of the show car were gone. While the latter looked nothing like the 458, the production version made it clear that it was an Italia with a fancy two-tone paint scheme and a weird front end. The proportions were the same, the virtual windshield was replaced with a real one taken straight from the donor car, and the small doors that opened like wings were abandoned in favor of plebian variants that looked nearly identical to those of the 458.

The same story continued inside where the awesome, completely redesigned interior of the concept was nowhere to be found. Instead, the Sergio came with the same layout as the 458, with the only addition being a dash-mounted Pininfarina plaque.

One of the coolest interior features of the prototype was the innovative headrests that were integrated into the rear roll bar and appeared to float above the seats. You would think that at least this was carried over, but no, customers had to settle with stock 458 buckets.

Watered-down exterior and interior design aside, the production car did share the same powertrain with its windshield-less sibling. Sourced from the 458 Speciale, it was comprised of a 4.5-liter, eight-cylinder, and a seven-speed Getrag dual-clutch. The most powerful version of the Ferrari-Maserati F136 naturally-aspirated V8, it could produce 597 hp and 398 lb-ft (540 Nm) of torque. That translated into a 0 to 62 mph (100 kph) acceleration time of three seconds and a top speed of 199 mph (320 kph).

Ferrari handpicked six of its most important (and wealthy) customers, allowing them to buy a Sergio and customize its exterior and interior finishes.

So how much did these people pay for a slightly redesigned 458 Speciale A? No less than $3,000,000, which was nearly ten times more than the aforementioned, track-oriented 458.

During the last seven years, a couple of owners have attempted to capitalize on the rare model by auctioning off their Sergios. The most recent example is the 2015 Geneva Motor Show car featured in this article, that went under the hammer at an RM Sotheby’s event back in 2018. Rumors have it that the owner was hoping to get around $4 million, but the car failed to sell even when the asking price was dropped.

All that being said, the Ferrari Sergio is a beautiful coachbuilt car. Some might say that it’s prettier than the 458 Speciale A it was based on, but we can all agree that it’s nowhere near the initial concept in terms of epicness, and its outrageous price tag was just another example of the Ferrari marketing department’s cleverness.

You can take a closer look at the beautiful concept car in the following YouTube video by Shmee150. 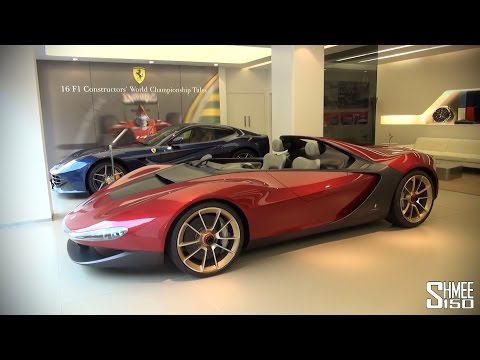