Mircea Panait
Introduced at the 2017 Geneva Motor Show, the 812 Superfast will be replaced in due time. Its predecessor, the F12berlinetta, that’s often shortened to F12, was offered between 2012 and 2017. The question is, is this prototype our first glimpse of Ferrari’s all-new V12 gran turismo?
16 photos

Fingers crossed, that’s a yes! The Prancing Horse stopped taking orders for the 812 Superfast in February, yet production will continue until all existing orders are fulfilled. Ferrari can’t do better than the 812 Competizione with the current generation’s underpinnings, hence the need for a replacement.

Going forward, the yet-to-be-named successor of the 812 family is expected to receive some kind of hybrid assistance. Given that everyone and their dog appear to embrace hybrid oomph in order to reduce carbon dioxide emissions and improve acceleration, the hearsay seems very plausible.

The Roma on which this prototype is based features a twin-turbocharged V8 from the F154 series, a family of engines that rolled out in 2013 in the Maserati Quattroporte GTS and in 2014 in the California T. Even the force-fed V6 in Alfa Romeo Quadrifoglio models is derived from this V8.

Apparently gifted with a longer hood than the production version, the heavily-camouflaged Roma is also fitted with a slightly modified front bumper. Whatever may be hiding in the engine bay, there’s no denying that it’s over-the-top exciting. Ferrari’s test driver appears to be thinking the same, more so considering the way he’s kicking the tail out in the corners.

On an ending note, it’s worth remembering that chief marketing officer Enrico Galliera confirmed last year that an even more powerful V12 than the screamer in the 812 Competizione is under development. He further noted that it’s for street-legal applications instead of limited-run track toys. 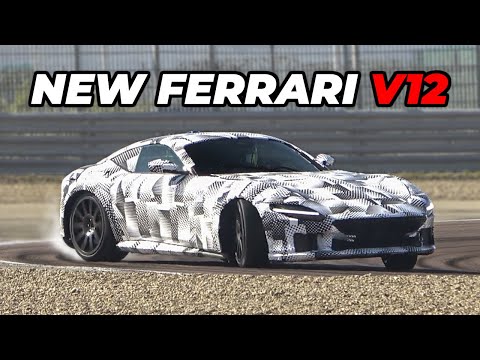