3 Ferrari Purosangue's Got a Big Mouth, Can Probably Trash Talk the Lamborghini Urus

5 Why Are Ultra-Luxury SUVs Fugly, And Super-SUVs Like Eletre So Darn Quirky?
Car video reviews:
Coverstory

Ferrari Purosangue Super SUV Caught Testing, Does It Sound Like a N/A V12 to You?

With its debut inching closer, Ferrari has shifted into a superior gear when it comes to the testing and fine-tuning phases of the Purosangue. The super SUV from the Maranello car firm has been spotted in the open once again, with its body fully wrapped in camouflage.
10 photos

But that’s not the big news here, as we’ve already seen multiple prototypes doing their thing in all sorts of environments. As a matter of fact, if you turn up the volume on the video embedded at the bottom of the page, you will hear a rumble that sounds very V12-ish.

Now, we cannot confirm if this is indeed the V12-powered version of the Purosangue, as it might launch with more than one powertrain, but the vehicle will indeed get a twelve-cylinder engine under the hood. This has been confirmed by the brand’s head honcho, Benedetto Vigna, earlier this month, during a chat with Reuters. The CEO said that, after they tested several powertrains, “it was clear that the V12, for the performance and driving experience it could provide, was the right option for the market.”

Truth be told, we’re not surprised at all that the Purosangue will be getting a V12, as Ferrari has a long tradition with such engines. This move allows the company to kill two birds with one stone, as it appeals to their diehard fans and provides just the right amount of performance in the electrified era. And let’s not forget that the Prancing Horse, just like pretty much every car company out there, is heading towards the inevitable ban of internal combustion engines.

Set to take on the Lamborghini Urus and the Aston Martin DBX707, the Ferrari Purosangue will be the company’s first-ever high-rider. It will offer space for the family, a decent cargo area behind the rear seats, and will have the ability to slightly venture off the lit path. As far as the unveiling date goes, no one outside the marque knows exactly when it will premiere, though we’d bet our bottom dollar on a presentation in the coming weeks. 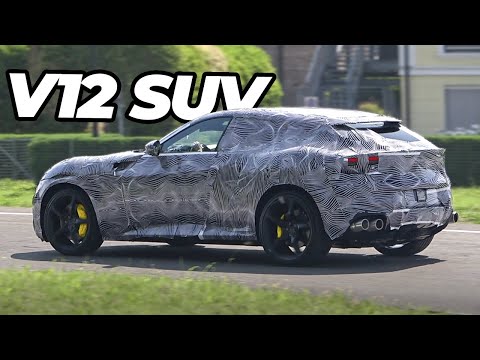