3 Gone in 30 Seconds: New Owner Has Car Impounded After Driving It Off the Lot

4 Porsche Taycan Hilariously Fails to Park, Two Other Cars Were in the Wrong Place

Aliens Took Back Their Monolith: Utah Mystery Structure Has Been Removed

Ferrari Flips and Burns on Chicago’s Lake Shore Drive, and It Was a Rental

Not all rentals are the same, so maybe always make sure you don’t overestimate your skills when you settle for a sportscar. A 22-year-old’s recent mishap is today’s cautionary tale.
8 photos

A red Ferrari, seemingly a 488 Spider, flipped and caught fire on Chicago’s Lake Shore Drive in the early hours of Saturday. There were two men inside it: the 22-year-old driver and a 20-year-old passenger, both of whom received minor injuries for which they required a trip to the local hospital.

Considering how badly this could have ended, this is actually the silver lining.

The Chicago Fire Department broke the news of the crash by posting photos of the wreck and what was left of the car after the fire, with the note “Please observe posted speed limits!” The video report from CBS Chicago below notes that police wouldn’t say whether alcohol or drugs were involved in the accident, or mention citations issued on the occasion, but the hint that speeding was a factor is clear.

The CCTV footage included in the video report would indicate the same. The accident happened on Oak Street curve, an area that’s proved problematic for drivers in the past, but only for those who failed to slow down before entering the curve. This seems to have been the case here, too: the Ferrari came in hot and the driver lost control, which sent the car into the concrete barrier on the right. It then flipped, landed on the roof and caught fire.

Since the CFD noted that the vehicle was actually a rental, commenters have been rushing to point out that this type of driver should probably start out small before taking a Ferrari out for a spin. No sense in trying to enter a marathon before you learn how to walk, right? The driver seems to have outed himself in the same thread, but his identity is yet to be confirmed.

Assuming he’s telling the true, the driver is Geek Jab, a self-identified rapper from North Chicago and, as of the time of writing, he’s picking fights with those saying he lacked the skills to take out a Ferrari – a rented one, no less. His argument against those criticizing him for being a reckless driver is, predictably, that they’re jealous haters who have never driven a Ferrari themselves. He also swears he’s actually “a good driver.” 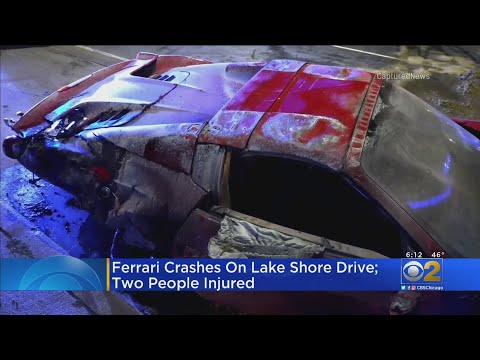 
Blessed to be alive can y’all save the jokes ¯ https://t.co/Jlg4HfGMdS