Sergiu Tudose
Some of the best straight-line battles out there are ones that feature evenly matched cars, and they don’t get a lot more even than racing a Ferrari F8 Tributo against the 488 Pista. According to the video, neither of these cars is stock, which would explain the sub-10 second quarter-mile times.
7 photos

Even without any mods, both can pull off low 10-second runs, and on paper, there shouldn’t be much of anything between them. Anyway, let’s discuss the 488 Pista first.

Unveiled at the 2018 Geneva Motor Show, it stood as the pinnacle of the 488 GTB range. Its design was influenced by the 488 GTE and 488 Challenge race cars, while its 3.9-liter twin turbocharged V8 engine was taken to 710 hp (720 PS) and 568 lb-ft (770 Nm) of torque. It’s also got better aerodynamics than the regular 488, a faster-shifting seven-speed dual clutch automatic, less overall weight, plus various other changes.

The 488 Pista had only been in production for about a year when Ferrari decided to come out with the F8 Tributo, thus closing the books on the 488 range altogether. The F8 featured the same 3.9-liter twin-turbo V8 as the Pista, with the exact same 710 hp and 568 lb-ft of torque. According to Ferrari, the F8 needs 2.9 seconds to hit 62 mph, while 0-124 mph happens in 7.8 seconds. The top speed is identical between the two.

Basically, the 488 Pista was so good, Ferrari decided to turn it into a direct replacement for the regular 488, sprinkle around some upgrades, and call it the F8 Tributo. Although in a sense, the latter represents more of a comprehensive facelift to the 488 GTB rather than an all-new car, seeing as how it runs on the same platform.

It really is fascinating to watch them race each other in a straight line, so enjoy the show. 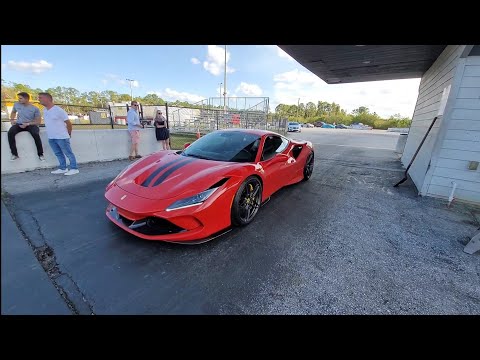