5 Why Is the Mondial the Most Unloved and Cheapest Ferrari of Them All?
Car video reviews:
Coverstory

Also known as the GT1, the GT isn’t a grand tourer. Ferrari told Italian partners Dallara and Michelotto to develop the road-going F50 into a proper racing car for the BPR Global GT Series, the predecessor of the FIA GT Championship that morphed into the FIA GT1 World Championship in 2010 and the FIA GT Series in 2013.
12 photos

Unfortunately for the F50 GT and the Prancing Horse, the V12-engined racecar did not enter any motorized competition over circumstances that include challenging homologation regulations and a serious lack of funding. Only three examples of the breed were produced in 1996, and that same year, Ferrari has benchmarked the newcomer against the 333 SP sports prototype that won three constructors’ and five drivers’ championships.

Not only was the F50 GT faster but it also had a larger engine at 4.7 liters compared to 4.0 liters. The F130B cranked out 750 PS (740 horsepower) in race tune, sending all of the suck-squeeze-bang-blow to the rear wheels with the help of a six-speed sequential transmission. Considering that the winged track machine tips the scales at less than the curb weight of the first-generation Mazda MX-5, the F50 GT hits 60 mph (97 km/h) in 2.9 seconds as well as a top speed of 233 mph (376 km/h).

Like every track-only Ferrari, the F50 GT beggars belief in terms of aural pleasure. Described as a “unicorn” by British racing driver Jon Lancaster, the ultra-rare model can be admired from the driver’s perspective in the following clip, lapping the Yas Marina Circuit in Abu Dhabi to the tune of 10k revs.

By comparison, the F50 that’s entitled to wear a license plate redlines at 8,500 while the fuel cuts off at 8,640 rpm. Not even the Ferrari FXX-K Evoluzione can match that engine speed, but then again, the blunderbuss in the F50 and F50 GT is derived from Formula 1.

The F130B is derived from the 036 of the Ferrari 641 that the Scuderia fielded in the 1990 season with Alain Prost and Nigel Mansell in the driver’s seats. Even though Ayrton Senna and McLaren won both titles, his nemesis Prost took five victories and Mansell finished first once. 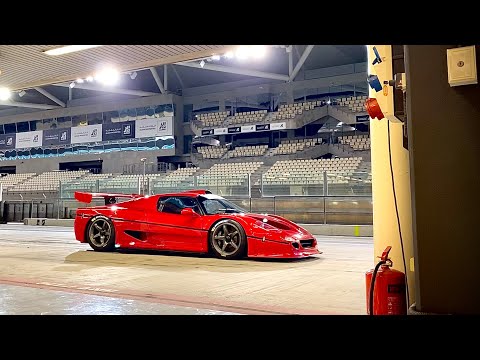