Ferrari F430 Designer Analyzes the New Roma, Gives It 9.5 Out of 10 Points

I’ve said it before and I’ll repeat it – the Roma is the prettiest Ferrari in ages. Penned by Flavio Manzoni at Centro Stile, the two-seat grand tourer has recently been subjected to a design analysis by one of the greatest car designers of the modern era, the guy responsible for the F430 and track-only FXX.
10 photos

Frank Stephenson has also helped Maserati with the GranSport and MC12, all road-going McLaren models from the MP4-12C to the 720S, the Fiat 500 city car, and the redesign of the MINI from 2000 with BMW underpinnings. These being said, let’s start with the obvious. The Roma is a 9.5 out of 10 according to Frank, particularly because the car “stands out as a Ferrari immediately.”

The fluidity of the lines, the sculptured hood, the body-color grille inspired by the egg-crate design of old, the curvatures; just about everything you see on the outside comes together into “almost one single piece of volume.” The cleanliness of the Roma’s side profile is also worthy of note, and this design perception may have something to do with the lack of Ferrari shields on the front fenders.

You will hear Frank talk about “surface control” a lot in the following video, a trick that gives the Italian grand tourer the kind of presence that other GTs can only dream of. The gem-like taillights are described as “a huge departure” from the rounded units we associate with Ferrari, but the Prancing Horse of Maranello may have switched to this design in order to complement the headlights.

As for criticism, some believe that the Roma “looks very much like an Aston Martin or like a Jaguar.” Frank doesn’t agree, and if you know your Ferraris well, this fellow is clearly harking back to the 365 GTB/4 Daytona and 250 GT Lusso. As the 60-year-old designer says at the 12:53 mark, “that’s just a comment by people who don’t know too much about the history of Ferrari.”

On an ending note, Frank doesn’t like one thing about the interior. It’s not exactly a criticism, but the man who gave road-going Ferrari cars the Manettino dial is missing the steering wheel-mounted red starter button introduced by the F430. The new Roma is thoroughly modern inside, which is why the start/stop button is actually a touch-sensitive panel located south of the airbag cover. 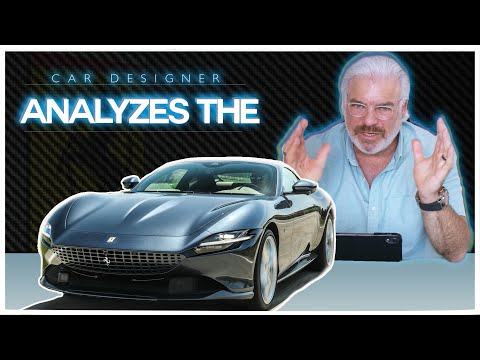