1 Widebody Ferrari F355 Shooting Brake Is Not Your Typical Berlinetta

4 Ferrari FF Crossover Rendering Shows What Could Have Been, Creator Fears for His Life

C8 Corvette vs. Jeep Trackhawk Is a David and Goliath Drag Race

Ferrari F40 Modernized: What Would the Iconic Supercar Look Like Today

The Ferrari F40 is like a Disney princess. Yeah, we know it's a crazy theory, but hear us out. It may look like a supercar, but it's also a rare, exotic beauty from a noble family and plenty of rivals wanted it dead.
4 photos

Fortunately, Ferrari's iconic supercar triumphed against almost all odds - except fires - and it remains one of the coolest machines to emerge out of the late 1980s. So has it aged well? There's only one way to find out, and that's with an "aging" rendering that brings its design into the modern era.

Fortunately, YouTube artist TheSketchMonkey specializes in supercar princesses like this. It's time to find out if it's a graceful transition or some botched facelift and tyrannical rule over Italy.

Before you press the "Play" button, let's have some background information. The F40 is one of the most fascinating cars of the modern era. Many believe it's the ultimate supercar of all time because of the way it's built and the raw driving experiences provided.

The proportions are perfect, and its flat shapes are easy to understand yet timelessly elegant. The twin-turbocharged 2.9-liter V8 had had abundant torque, and many believe the real horsepower output is over 500 horsepower, even though Ferrari said only 478 hp. By today's standard, hitting 60 in 3.9 seconds seems slow, but it's really not when you're the guy in charge, not some auto gearbox or fancy traction control.

The build quality is quite bad out of the factory, but many hardcore fans spend hundreds of thousands to get better paint and sometimes comfortable interiors. Fortunately, you can't quite see the flaws in photos.

So, what needs to change in order for the F40 to look almost like a modern Ferrari? Well, this brand is probably the one TheSketchMonkey knows about the most, and according to him, some curves have to be added. Also, those 5-spoke wheels would look small even on a Toyota Prius.

Update: The same artist has also changed up the front end. Check out the other rendering video he released. 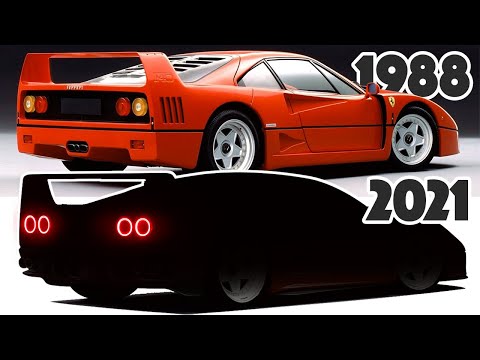