1 $2.5 Million Worth Ferrari Daytona Once Owned by Roger Waters Burns to the Ground

Fiat 500 Rally Car Has an R Kelly Moment, Comes Back Down with a Bang

Vlad Mitrache
Three of the 799 F12tdf (Tour de France) Ferraris have spent an afternoon on the sunny track in Mugello, Italy. They weren’t alone, however, with Sebastian Vettel and Kimi Raikkonen also showing up in their racing suits.
1 photo
Besides making great cars, Ferrari also knows how to exploit the wonderful tradition surrounding the iconic Italian brand. Sure, that’s easy when you happen to own a 3.26-miles-long track in Tuscany and the sun decides to shine brightly on your big day out, even though it’s late autumn.

The clip, then, was filmed on the “Autodromo Internazionale del Mugello,” which is owned by the Scuderia Ferrari and is where it tests its Formula One cars, among other things. Things like organizing events to show off its latest creation, the Ferrari F12tdf.

Don’t let that Tour de France reference fool you: even though this name has recently been associated exclusively with cyclists, it was once a very respected automotive endurance competition similar in certain ways to the Mille Miglia, if you like. Of course, Ferrari was no stranger to this race, having dominated the event between 1956 and 1964.

But enough about history, let’s focus on the present. Of the 799 models Ferrari will make, three were present on the Mugello track this weekend. The red monotony was interrupted by a yellow car, a color that was also used for the photos accompanying the model’s official launch. The real star of the event, however, was a red model driven by Raikkonen, who proved once more he knows best what the public wants, and pulled some smokey donuts.

There are also instances of the cars flying by on the infinitely long stretch of the Mugello track, as well as some close-ups of the exterior and interior. You get to hear the car in every conceivable situation: at start-up, running idle or blasting on the track full throttle. It's the next best thing to actually being there. 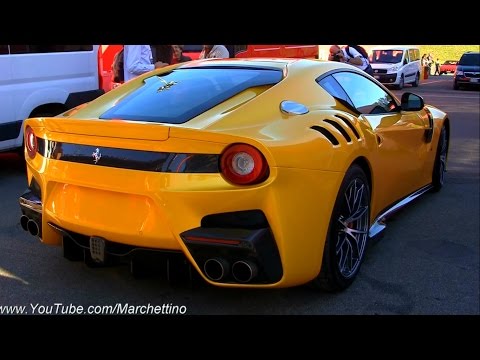