4 Ferrari 360 "Speedster" Is Not Your Typical One-Off

Vlad Mitrache
The name 'Ferrari' used to be associated with unparalleled performance, at least when compared to something that costs half the price, if not less. However, a few caveats apply.
1 photo
For instance, not all Ferraris are created equal. The SF90 is a monstrous hypercar that'll wreck most other vehicles on a racetrack without breaking a sweat. The F8 Tributo is a good all-rounder while the GTC4Lusso T has an all-wheel-drive system to complement that turbocharged V8 engine for superior off the line acceleration.

Back in its day, though, the F12 was the fastest Ferrari money could buy. It had a 6.3-liter naturally aspirated V12 engine that won a lot of prizes in its time - not in the least for the 741 hp it develops, we would imagine. It also had a zero to 62 mph (100 kph) acceleration time of just 3.1 seconds, which is not bad at all for a rear-wheel-driven car with a non-force-fed engine.

But hear this: the two-seater also had a very useful trunk space of nearly 500 liters (17.6 cu ft). Yes, the fastest Ferrari was built as a daily driver for the rich, a grand tourer that focused on comfort just as much as it did on performance, if not more.

That makes it quite similar to the Tesla Model S P100D as the electric sedan is both useful and very quick to accelerate. Tesla's antics on the drag strip are no secret to anyone anymore, to the point where you'll see some muscle car owners scorn at having to go against the battery-powered sedan as they hate giving the EV trend more ammunition.

Apart from that bit, though, there's very little bringing these two together. Sadly, one of the main things that set them apart, the sound they make, is missing from this clip. Whoever decided to cut the audio feed of a naturally aspirated V12 has their place safely kept in hell, and so do the drivers with bad reactions that nullify an otherwise interesting drag race.

Still, we've included another video below (we couldn't let you leave without some V12 symphony). It's a Ferrari F12 going against a Tesla Model S 85D back in 2015, and there too the Ferrari driver lingers a little more than he should on the starting line. However, the Italian GT is more than capable to catch up and overtake the P85D before the quarter mile was over, which we doubt would have been possible in the more recent clip even with a balanced start. If anything, that's testament to how much Teslas have improved over just a few years. 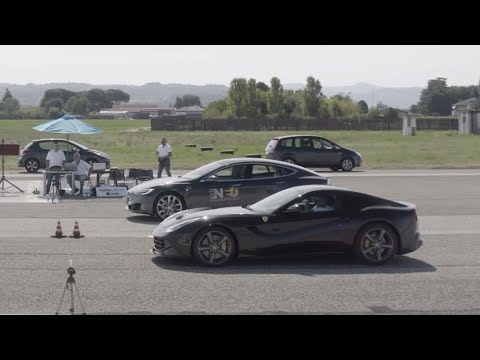 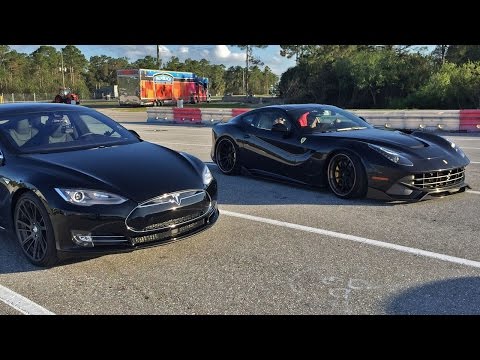