Owned by Matt of Caliber Customs, the 2004 model year Ford Mustang SVT Cobra in the featured clip still features the bone-stock engine. This generation of the Cobra is lovingly dubbed Terminator, and the Blue Oval built a little more than 19,100 units over the course of two model years.
16 photos

The 4.6-liter engine may be stock, dual overhead cams, and everything, but popping the hood reveals a fifth-generation supercharger kit from Whipple. An expensive twin-screw design with a displacement of 3.0 liters, the blower is complemented by a beefy throttle body. As opposed to 413 rear-wheel horsepower when it was brand-spanking-new, this muscled-up machine currently makes in the ballpark of 670 rear-wheel horsepower.

All that fury is controlled by a manual tranny, 345 meats out back, and upgraded brakes. Augmented with Rays RE40 bronze-finished wheels, carbon fiber for the door cards, Sparco racing seats, a roll cage, and a lightweight battery in the trunk, this fellow also packs three coolers in the back: one for the fuel, one for the stick shift, and one for the differential.

The finishing touches come in the guise of a blown diffuser exhaust setup and a neat-looking spoiler. Tipping the scales at 3,600 pounds (1,633 kilograms), the ‘Stang is much obliged to duke it out against a Ferrari-engined Scion FR-S in a straight line. Spoiler alert: it wins every time!

Not a true Ferrari engine per se, the F136 powerplant features a cross-plane crankshaft rather than a flat-plane crankshaft because it’s been sourced from a Maserati Quattroporte instead of a Prancing Horse. The headers and intake manifold come from a California, though, and lest we forget, even the Maserati-spec engines were produced by the Maranello-based outfit.

Blitz 03 wheels, a BorgWarner T-56 out of a Camaro, coil packs from an Audi R8, sensors that were originally developed for GM LS applications, and a strut tower brace from a Honda Civic pretty much seal the deal. Cory of Sideways Fab & Customs took inspiration from Ryan Tuerck's Ferrari-powered Toyota GT86 for his pride and joy, which uses a Wiring Specialties CAN Bus emulator for the factory instrument cluster and cruise control. 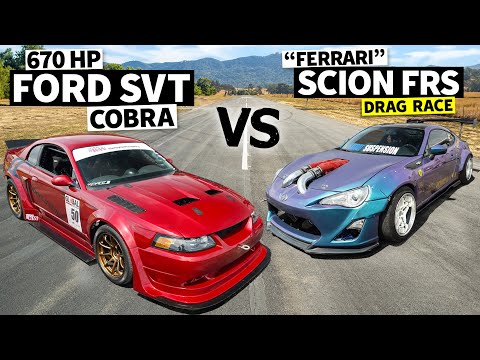