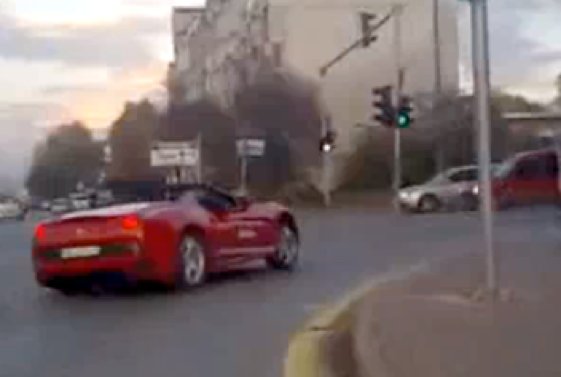 It just seems that people can’t get enough accidents in which supercars get wasted due to a driver’s silly mistake, so here’s another one for you. Two Ferrari California drivers were drifting around on public streets in Sofia, Bulgaria, while someone was filming with what we believe it is a phone camera.

According to wreckedexotics.com, after a few tricks, one driver gets unlucky and hits a car while drifting and then crashes into a bulldozer. It looks like the driver is, once again, unharmed, but the Ferrari was not so lucky.

Judging by the stickers on both Ferraris and the license plates from Switzerland, the cars must have been part of an event of some sort. So what could be worse that crashing your Ferrari? Crashing someone else’s Ferrari while drifting and getting it all one tape.

Just in case you don’t know what we’re talking about, the Ferrari California is a grand touring sports car that was launched by Ferrari at the 2008 Paris Motor Show. It is a two door, four seater hard top convertible powered by front-mid mounted gasoline direct injection 4.3-liters V8 producing 338 kW (460 PS) delivered to the rear wheels.

The California is being built in a new production line adjacent to the existing factory at Maranello. Ferrari plans to produce 5,000 Californias in the first two years of production, thereby increasing Ferrari production by 50% with introduction of the model. According to many motoring magazines, it is sold out until 2012, so replacing the crashed one is not going to be easy.