5 Acura Integra Jumps Back in Time, Inhabits Digital Soul of Non-Spyder-Eyes Coupe
Up Next

Aurel Niculescu
Not long ago, even the automotive industry had a few taboos left intact. Such as the idea of an AWD four-seat Ferrari or a fully-blown Bentley SUV, among others. Now all limits went down the drain, both literally and figuratively.
17 photos

As such, affluent customers around the world can not only flaunt their cool Bentley Bentaygas (to me it still looks like one of the ugliest SUVs ever) but they can also be seen enjoying the Rolls-Royce Cullinan life (a close second to its rival in terms of ugliness). Hey, even Ferrari is getting ready to join the high-riding bandwagon.

But just to make sure the Purosangue doesn’t fall from the sky exactly like an uninvited Apocalypse-harbinger asteroid, they made some headwind preparations. First, they got the world used to the idea of having an AWD four-seat Ferrari running around. And the Prancing Horse’s FF has already made an offspring, the GTC4Lusso.

Just recently, the company also introduced the world to another of their “usual” one-offs, called BR20. Somebody decided the GTC4Lusso platform is cool enough to warrant their millions, but also didn’t need the rear seats (which got deleted) or the three-door Shooting Brake body style. Thus, the BR20 is a two-door fastback that references iconic Ferraris of the 1950s and ‘60s with its reworked styling.

Since bespoke Ferrari projects don’t come around nearly as often as Tifosi would love to, virtual artists have also jumped at the chance of meddling with the latest Prancing Horse styling hero. As such, while the pixel master behind the superrenderscars treated us to a useless BR20 Shooting Brake, the CGI expert of SRK Designs social media fame was a bit more courageous.

Thus, in true behind-the-scenes making-of style, he/she proceeded to digitally morph the lovely BR20 into something that will have Ferrari purists run amuck (once again). Since the SUV controversy is already being taken care of by the OEM itself, the dying sedan segment got a virtual chance at bragging about a Ferrari BR20 4-Door Concept.

Frankly, there isn’t much to say about this digital work, considering there’s just one POV. But the side view did come out enticing. And if not for the sagging deliveries in the face of crossover adversity, Ferrari might have done well to consider such a transformation. Alas, given the current SUV/truck state of the automotive industry, this is just wishful thinking. 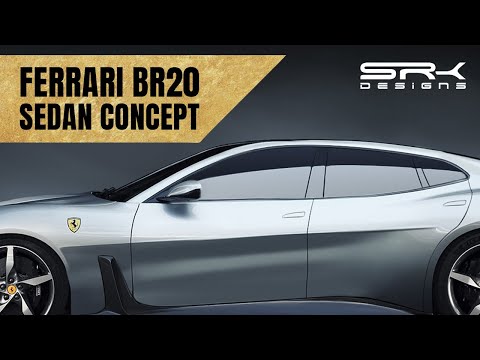