4 Ferrari Drops the "Modificata" Bomb on the Portofino, 612 HP and 8-DCT Are Here

Home > News > Car Profile
Vlad Mitrache
Some people never learn: they cried when Ferrari decided to cut the number of cylinders, but the company went on with it; they cried when Ferrari announced a more widespread use of turbochargers, but the company couldn't care less; now, they cry about Ferrari going hybrid, and guess what the Italian company is going to do.
6 photos

That's right, go hybrid. In case you missed it, more than half of the manufacturer's range will have some sort of electrification by 2022. And when asked about making electric models, Ferrari's position was that the company feels the technology isn't ready yet. You hear that? It didn't say "no" or "get outta here," it essentially said "not yet."

Back to hybrids, though, and we now have another spotting of the mix-powered 488 test mule, a car that's been making the rounds since 2017 under one guise or the other. The hybrid supercar has gained some high-voltage stickers in the meantime, which leaves no doubt over the type of powertrain in has. What we still don't know, though, is the nature of that internal combustion engine.

Rumors say it's going to be a turbocharged V6 unit, potentially making this a double whammy for those people we were talking about earlier - not only does it have an electric motor like the LaFerrari and SF90 Stradale, but it also loses two cylinders, bringing the total to half what most people think a Ferrari should have.

It most definitely won't do anything to hurt the model's power output. If the unit in question is derived from the 2.9-liter V6 used in the Alfa Romeo Giulia Quadrifoglio, then the Ferrari engineers can surely squeeze more than the 510 hp it makes in the sporty sedan. The 670 hp figure of the standard 488 GTB shouldn't be a problem for the joint forces of the 2.9-liter V6 and an electric motor (or maybe two?), so it's really more about style than substance. Audio style, to be more precise.

This clip from Varryx shows two things: one, the powertrain is perfectly capable of running on electricity alone at low speeds - it's easy to notice the moment the test mule's ninja movement ends as the thermic engine comes to life; two, the sound it makes isn't really that bad. Is it as good as a naturally aspirated V12? No. Is it close? No. Is it different? Oh, yes. Is it good? Well, Japanese sports cars have gone away with it for so long, so it can't be bad. Is it something we can live with? We can and we will, just like the rest of the world. 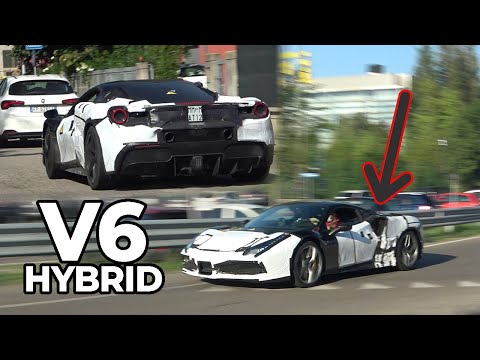