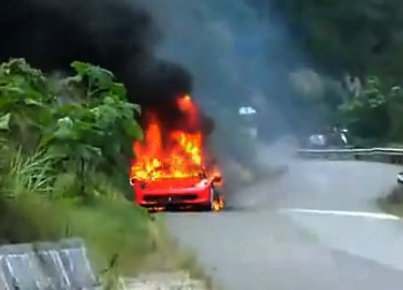 By now, we must admit we have lost track of how many Ferrari 458 Italias we've seen going up in flames so, if that's fine with you, we'll give up trying to count them. What is obvious though is that the vehicle introduced last year at the Frankfurt Auto Show as a replacement for the F430 is affected by some serious issues.

The latest news of a 458 Italia going up in flames comes from somewhere in China, where the video featured below has been shot. The images shown depict an already known image: a red 458, parked on the side of the road, being eaten away alive by violent flames.

It doesn't really matter who owned, where exactly the video was shot or how the car was driven before being melted by fire. What matters is that it appears there is really something wrong with these vehicles, probably in the engine compartment where all the fires have originated.

The Italian manufacturer, although officially not doing anything at this point, has announced through unofficial sources it will begin to take action. Meaning the fires will be investigated, despite the fact that it appears the carmaker still believes it's not the cars to blame, but some other factor.

"It is important to differentiate between what is a vehicle fire and outside factors and I would include driver error," a Ferrari UK spokesman said yesterday.

"Six have been incidents where it potentially could be the driver or other factors. I am not in a position to comment on the vehicle fires and all we can say is we are taking it obviously very seriously."