Ferrari 360 Spider Takes a Dive into the Sea 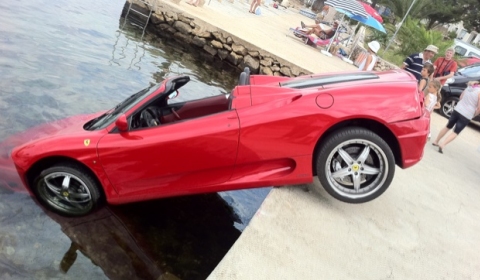 Usually we get to see all sorts of flaming supercars in some not-so-ordinary situations, leaving us with a bitter taste and the thought of another automotive beauty turned to ashes. This time, however, we are here to tell about an incident that, while also involving the total incapacitation of such a creature, is the complete opposite of a burning four-wheeled machine.

The car in question is a red Ferrari 360 Spider that crashed on the island of Pag, Croatia, this morning, as GTSpirit reports.

The supercar, registrated on Slovenian plates and usually parked in the streets of Ljubljana, was subject to a rather unsuccessful swimming lesson. Specifically, the driver and his car plunged into the sea, following a brake fail on a downhill slope.

The Spider version of the car came a year after the coupe and was immediately penned as classic. Drawn by Pininfarina, the car was thought to hold classic beauty and sporty aggression at the same time. The car had some rigidity issues which were tackled by the Ferrari engineers by strengthening the body in key locations. Another invention is the folding roof which comes over the engine bay.

Performance wise, the car is fitted with a 3.6-liter V8 engine that puts out some 400hp and 373 Nm of torque, fitted under a glass hood. This topless Prancing Horse is capable of accelerating from naught to sixty in 4.6 secnds, while reaching a top speed of 181 mph (291 km/h).