The iconic Ferrari Dino is back! Well, sort of. As rumored over the past couple of years, Ferrari reintroduced a V6 engine in its lineup. In turbocharged hybrid form. Meet the 296 GTB, Maranello's answer to the McLaren Artura.
17 photos

A mid-engined, two-seater berlinetta, the 296 GTB is essentially a slightly more compact F8 Tributo with a fresh design. While far from revolutionary on the design front, the 296 GTB is a milder, smoother proposition as far as exterior looks go. But it's definitely worthy of the Ferrari badge.

The Maranello-based firm made it very clear that the 296 GTB does not replace any model in the lineup, but introduced a new segment into the company's offering. By drivetrain alone, the 296 GTB is a competitor for the recently announced McLaren Artura.

Speaking of which, this Prancing Horse marks Ferrari's return to V6 power for the first time since 1974. That's when the Dino 246 was discontinued. It's also the brand's first sports car fitted with a 120-degree, turbocharged V6. And it's quite the potent mill.

The company describes the new V6 as a "little V12," claiming that its high-frequency notes sound like that of a naturally aspirated V12. "Even at low revs, inside the cabin, the soundtrack features the pure V12 orders of harmonics which then, at higher revs, guarantee that typical high-frequency treble," reads the press release.

Ferrari's first rear-wheel-drive plug-in hybrid, the 296 GTB combines the V6 with an electric motor for a total output of 830 PS (818 horsepower).

That's quite the massive output given the layout and provides an extra 110 PS over the V8-powered F8 Tributo. With a combined output of 680 PS (671 horsepower), the McLaren Artura is no match for Ferrari's latest hybrid, at least on paper.

The hybrid powerplant sends all that oomph to the rear wheels through an eight-speed dual-clutch transmission. And before you ask: yes, this Ferrari will run on electric power alone too. Ferrari says the motor provides enough juice for 25 km (15.5 miles).

Ferrari says the 296 GTB lapped the Fiorano track in 1:21 minutes, which makes it a half-second quicker than the 488 Pista and only a second slower than the 812 Competizione.

While it's safe to say that the 296 GTB will be followed by a drop-top, GTS version soon, Ferrari is also offering an Assetto Fiorano version. It's essentially a track package with a racing-derived suspension, a revised aero setup with extra carbon-fiber bits, and lightweight materials that make it 12 kg (26 pounds) lighter than the standard 296 GTB. It also sports an optional, dedicated livery inspired by the Le Mans-winning 250 LM.

No word on pricing and availability yet, but it's safe to assume that the 296 GTB will be a bit more affordable than the F8 Tributo. 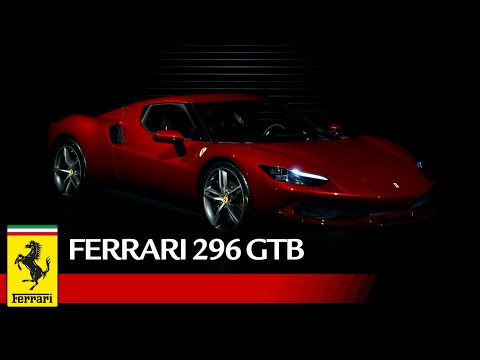