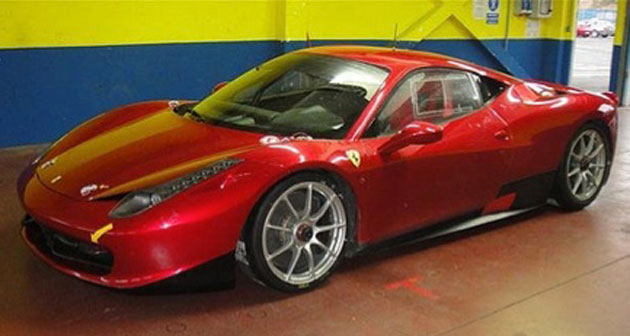 The Ferrari 458 Italia is already an incredibly hot vehicle, but its image may be about to get an additional boost as the supercar might receive a dedicate racing series starting from next year.The information is based on a set of images showing a 458 Italia high on racing equipment, released on the web by the Axis of Oversteer.

The Ferrari 458 Italia Challenge (let’s call the car this way) talks to the road via a set of new nine spoke ultra-light alloy rims, which have a single, central wheel nut and seem to be wrapped in slick tires.

The vehicle sits closer to the road than a factory stock 458 Italia and uses generously-sized carbon ceramic brake discs. The car comes with a revised front fascia, that adds an additional central air intake and uses a new grille.

The front of the car features racing equipment such as hood locks and a tow hook (located inside the front left air intake), all of them being signalized. Moving to the side, we see a set of aerodynamic profiled skirts which are wider than the stock ones, as well as plastic windows, with a specific racing opening system.

The rear of the upcoming racer, which also features a signalized tow hook, seems to be a work in progress area, as its lower area is lacking multiple finishing elements. The 458 Italia Challenge’s interior confirms the car’s motorsport intentions, as it features a set of racing seats and a rollcage.

We are looking forward to the official launch of the newest Italian racer.