2 Parking Your Car on a Frozen Lake Is a Bad Idea, 15 Owners Find Out the Hard Way

Aptera, Lightyear, and Sono Motors Main Link Is Not Being Solar But Rather Being Startups

Vlad Mitrache
Five years ago when you bought your car - a coupe with poor rear visibility - you thought that getting the larger wheel size was more important than opting for the parking sensors, and so you ticked that box instead and had to live with your decision for the rest of your life.
1 photo
Gazing at the car on the outside and you felt like giving yourself a pat on the back: the car definitely looks better with those rims, not to mention the sensors would have ruined the bumpers. When trying to parallel park, on the other hand, you feel like punching the five-years-ago-you right in the kidneys. It's not that you can't do it, but it's an unnecessary stress - one you could do without.

Well, you've always got the option of buying an aftermarket kit and going to a workshop to have them installed. But we all know what that means: some guy is going to drill holes in your bumper while another one will pull the carpets out to install the wiring. And you know he won't put them back the way they were before.

Now, though, thanks to some genius, there's another option. It's called FenSens, and it literally comes with no drawbacks - at least we fail to spot any. It's basically a parking sensors kit that can be installed with only a screwdriver (which is included in the package, would you believe it) and doesn't need any interior modifications. How does this sorcery work?

Easy. What you need to do is pay $100 (will be $150) and you will get a set of FenSens license plate holders that include the sensors and a small battery pack. They mount on your vehicle like any other plate would, only this time you'll use the special security screws that only work with the provided screwdriver. Once the plates are in place, all you need to do is download the app and sync your smartphone with the devices.

When an object is detected within range (up to 10 feet, roughly three meters), the app will start automatically (it will send a push notification on iOS) and inform the driver about the distance remaining to the obstacle both visually and acoustically. FenSens even offers a special truck version which has the sensors mounted at the top of the plate holder. The battery lasts for about five months and recharging the detachable battery only takes two hours.

Yeah, it really is that simple. If you're anything like us, you're now divided between congratulating the people behind this idea, and kicking yourself for not being the fist to come up with it. It seems so logical now. But don't worry, there's still hope for you: you can invent the time machine, go back to 2011, be the first to launch FenSens and become rich. Oh, wait, you have a time machine... 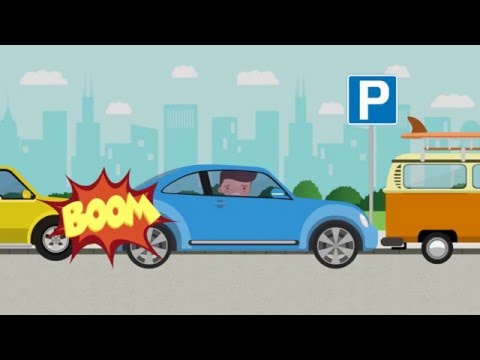