1 Volansi's New Modular Drone Is Built to Go the Distance, Can Fly for Eight Hours at 70 MPH

5 FedEx to Use Nuro's Autonomous Robotic Vehicles for Deliveries
Car video reviews:
Up Next

FedEx recently announced its plans to test autonomous drone cargo delivery and has chosen to use Elroy Air’s Chaparral VTOL (vertical take-off and landing) aircraft for the job.
7 photos

One of the subsidiaries of the large transportation company, namely FedEx Express, will give drone delivery a chance for its middle-mile logistics operations, moving shipments between sortation locations.

Testing this new type of cargo delivery is FedEx’s initiative to make the best of emerging technologies, which are believed to improve efficiency, safety, and productivity. FedEx and Elroy Air have been in business together for two years now. According to the latter, it is easier to reach more people faster when you are not limited by challenging infrastructure, traffic, airports, and logistics, as explained by Kofi Asante, Elroy Air’s VP of Business Development and Strategy.

Based in the California Bay Area, Elroy Air made the headlines in late January when it unveiled the pre-production version of its Chaparral VTOL aerial cargo platform. The delivery drone carries the payload in a lightweight, modular pod, which looks like a small boat.

All the operator has to do is load the cargo into the pod, after which the Chaparral comes and picks it up autonomously, without any further human intervention being required. It is a process that only takes a few minutes.

Boasting of building on more than 100 years of American aviation and aircraft development history, the so-called first-of-kind autonomous air cargo system has a full carbon composite airframe and was designed to fit in a 40’ shipping container or C-130 cargo aircraft. That means it can easily be shipped and deployed anywhere in the world.

What makes this seemingly average delivery drone competitive is the fact that it is a long-range aircraft with a generous payload capacity. The Chaparral can carry up to 500 lb (226 kg) over a distance of 300 miles (482 km). It is equipped with a hybrid-electric powertrain, which means it is not completely emission-free.

Elroy Air and FedEx Express plan to begin flight testing in 2023. You can take a better look at the Chaparral in the video below. 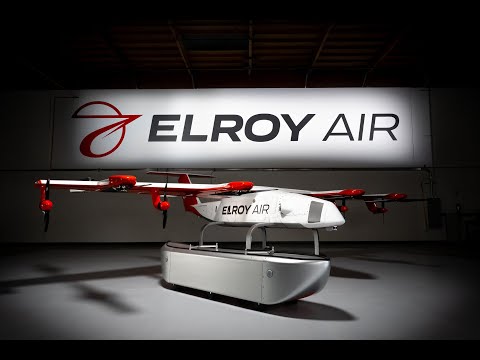