3 Video: Watch the New BMW M4 CSL Lap the Nurburgring Quicker Than Any Other Bimmer

The 2022 edition of the Goodwood Festival of Speed officially closed its gates a little over two weeks ago, yet videos from the event keep hitting the web. One of the latest that we came across shows the BMW M4 CSL take on the famous Hill Climb.
9 photos

Embedded down below, it is 5 minutes long and puts the spotlight on the M Division’s latest lightweight contender, which was shown to the world almost two months ago. It follows in the footsteps of the E46 M3 CSL, and M4 GTS, and it is the most extreme take on the new-gen M4 family so far.

Bathed in carbon fiber inside and out, the M4 CSL has improved aerodynamics and weighs less than the regular M4 Coupe. It has seating for two on the pair of bucket seats, and instead of a rear bench, it sports a net that can be used to secure helmets, as well as other stuff. Stopping power is provided by the carbon ceramic brakes, and despite its track-ready nature, it doesn’t really cut back on most comfort and technology features.

Just like its M3 and M4 brethren, the M4 CSL uses the same twin-turbocharged 3.0-liter inline-six engine, which is good for 542 hp and 479 lb-ft (650 Nm) of torque. The extra 39 hp, combined with the weight loss, and other modifications, allow it to deal with the 0 to 62 mph (0-100 kph) sprint in 3.7 seconds, which is basically previous-generation supercar territory. It is also the brand’s quickest production model to have ever lapped the Nurburgring Nordschleife.

Set to enter production at the Dingolfing factory in Germany this month, it will be capped at only 1,000 units. Pricing in our market starts at $139,900, before the $995 destination charge, which makes it almost twice as expensive as the base M4 Coupe. 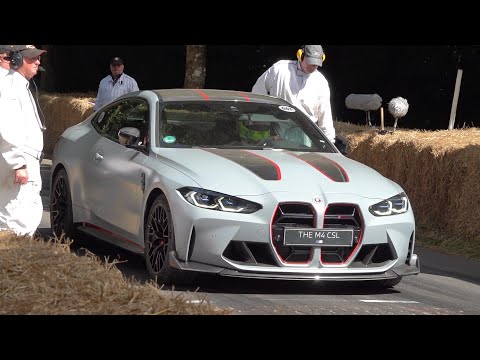