1 Elephants Don’t Really Mix With Rockets. Still, Here’s How Many Would Fit in One

5 This Boeing Spaceplane Could Have Been the Ultimate Space Freighter, Exists Only Here
Car video reviews:
Up Next

Future of Ford Focus Plant in Germany Is Uncertain

People in the automotive business are used to seeing concept vehicles come to light all the time. That’s because through concepts carmakers, and at times even bike makers, can test new design ideas and new technologies, but also the public’s reaction to them. But there’s one field of human activity that is perhaps equally as rich in concepts, even if most of the times they’re not all that visible: space exploration.
11 photos

When one says space exploration today, the mind is immediately filled with the rockets and spaceships in use today. They are the result of about half a century of research and development, trials and errors, triumphs and tragedies. But space exploration is much more than that, and could have been entirely different today had other design ideas been accepted back when there were tons of them floating around, back in the 1960s.

We’ve talked about several of them over the years here on autoevolution, but we’re not nearly done, as clearly demonstrated by the constant supply of CGI videos coming our way courtesy of a specialist named Hazegrayart.

This month, the specialist’s focus, and now ours, fell on something called SASSTO, or Saturn Application Single Stage to Orbit. That would be the concept of a reusable single stage rocket capable of getting Gemini capsules (and more) in orbit, and advancing America’s space exploration program.

SASSTO was imagined by Douglas Aircraft Company engineer Philip Bono, a man with a real passion for single stage vehicles – over the years, he came up with several ideas, including something called ROMBUS (Reusable Orbital Module, Booster, and Utility Shuttle), the Hyperion rocket, and the ROOST (Recoverable One Stage Orbital Space Truck).

The SASSTO was imagined as an incredibly mutated Saturn rocket, being nothing more than a modified upper stage of one. Like many other designs from that era, it never came to be.

Yet, the aforementioned Hazegrayart managed to bring one to life, digitally, so we here in our reality now have the chance to witness the SASSTO do its thing on film. And it’s like taking a peek in an alternate reality. 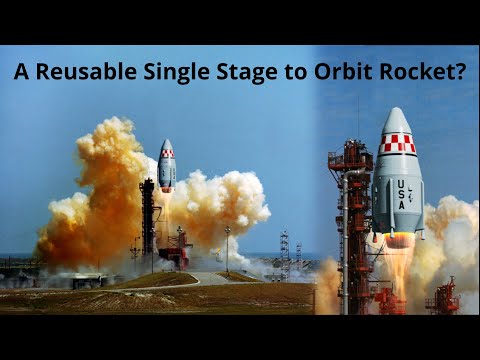