I've seen bikes before, and I've seen crazy folk going down snowy hills on bikes. But never have I imagined that someone would get bored one day and push out a specific machinery to do just that, bicycle your way up and down snow-covered hills.

It came as a surprise when I first saw the videos of how this thing functions and even looks. As you can see in the gallery, the rear half is you classic 'Fat’ bike set-up, with a crazy wide tire. These types of tires and designs for bikes are known as ‘Fat’ bikes. Usually, you’ve seen them riding down the street, but as a completed bike, with a wide fork and tire on the front as well.

The most common recreational use for a fat bike that I've seen include trails, downhill riding, and cross-country, where crossing diverse terrains could require a wider range of tire capabilities. But that wasn’t enough. What we see today, is a hybrid type vehicle. Somewhere between a bicycle and a snowboard? Yeah, something like that.

Just check out the video at the bottom and see how and what this thing can do. I think it’s absolutely amazing. Look at the way he carves around those corners and trees. How he drops into those slopes and shoots out the other side. The rear looks like it’s handling exactly like a snowboard, even though it is a bike tire. And the front slices into the snow like one too.

Here, imagine this for a moment. Your buddies give you a call at six a.m. on Saturday and say, “Hey, we’re going up to the top to hit some slopes on that fresh powder from last night. Want to join?” Of course. you say yes, you’ve been snowboarding since you were a kid.

But then you realize that this time you won't be riding a snowboard, after-all you just got your Fat Bike Ski that you ordered the week before mounted and was just waiting for this call. An hour later you show up at base camp and all your buddies are unpacking skies and snowboards. You take out half a bike, with no front wheel and a modified extension of your current fork.

“Uhh, where’s you board dude?” you don’t answer. You reach into your car and pull out basically half a ski. You friends look at one another without a sound and then back at you. In that time, you already installed the ski and are now standing at the side of your bike with a “let’s go” look on your face. Your buddies start to laugh and you get on the bike. With a stroke of the pedals, your friends are still at the car and you’re waiting in line to buy a ski-pass. While in line it get’s even weirder, but we’ll do that some other time.

The biggest benefit of the ski is that is can be mounted on nearly all Fat bikes and mountain bikes alike, and on both a rigid or suspension assisted front forks. It all depends on how you like your ride and how much down-hill you’ve done. To make sure that you have no issues fitting the ski to your bike, the guys at Fat Bike Skis recommend specifying your wheelbase of the frame you’d like to use.

The ski itself is shaped through a dual-arc design, offering maximum surface contact at all times, giving it an ability to perform in snow up to 18 inches deep also assisted by ski runners that help with high speed stability and straight-line tracking. All of this is held in place by a modified fork that simply bolts onto your pre-existing fork. Composed from high grade aluminum components held together by manually crafted fish-scale welding, the entire set-up comes in at 5.4 lbs (2.45 kg). 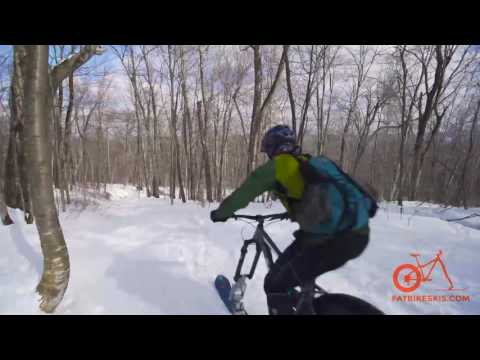