1 The State of Nevada Played Roulette with the Taxpayers' Money

3 BMW's HoloActive Touch Will Give Your Grandma a Heart Attack

Faraday Future's Lighting System Is like Nothing You've Seen Before

Vlad Mitrache
Faraday Future is one weird company: on the one hand, it promises to introduce new tech and what appears to be a very bold design (remains to be seen if it's also appealing), and on the other, it's faced with the good old fashioned financial problems that could very well spell its doom.
5 photos

For the moment, though, FF is alive and kicking, and it has just released a new teaser video. After making sure we got the idea that the upcoming crossover is fast (sub three seconds to the 60 miles per hour mark, to be as precise as possible at this moment), the guys at Faraday are now teasing the vehicle's lighting system.

The what? Yes, in most cars this would make for the most boring teaser ever, but not with Faraday Future's electric SUV. We feel it has to be mentioned at this point that the EV the company plans to unveil in January is not a production-ready version - in fact, you could still regard it as a concept, but not one that has no links with the real world like the first hypercar it showed.

Actually, if you look at the FFZERO1 and then browse through the tidbits of information available on the crossover, you'll notice there are a few resemblances. One of them is the light bar that connects the two headlights. This will give Faraday Future's car an unmistakable visual identity, making Audi's LED strips seem petty.

Since the car does not need a radiator grille, the space beneath the headlights is taken up by... some more lights. The designers have included a lit-up pattern that can even be used to draw the company's logo, making the need for an actual badge redundant.

The headlights bear the inscription "Solid State Lighting Array," but there's no way of telling exactly what they can do. Since they look awfully complicated, we're going to assume they'll pack at least the same level of technology as all the other manufacturers' intelligent LED headlights.

With all the talk surrounding the company's fortunes, the weight resting on Faraday Future's first vehicle is immense. In fact, it's safe to say the US-Chinese startup is history if this car doesn't make a big impression. Judging by what we've seen so far, it has every chance to do it, but Lucid Motor taking the wraps off its gorgeous Air sedan just a few weeks ahead is putting even more pressure. 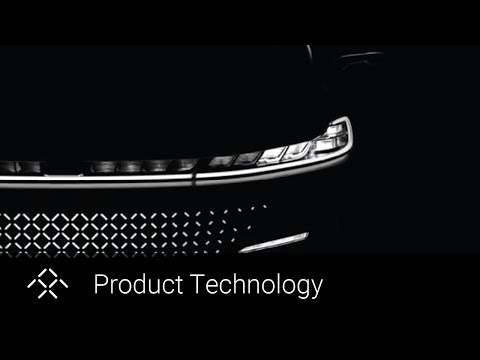