2 Faraday Future Prototype Spied in Traffic, It Is An Advanced Mule

Vlad Mitrache
The U.S.-Chinese startup has worked hard to build a lot of hype ahead of the CES debut earlier this year around the first car it plans to put on the market - the FF 91 crossover-sedan-thingy.
1 photo
Since then, though, the intensity of the promotional material has dialed down a few notches, apparently to suggest the company is busy working on fulfilling its promise (which a lot of people still doubt because of all the financial troubles that Faraday Future investor, Jia Yueting is dealing with).

Now, though, during a break, the team managed to find the time for what is arguably the best video it has released so far. The FF 91 still looks impressive, even though the positive receptions of its design was not unanimous. If you compare it to Tesla's Model X or Fisker Inc's prototype, it definitely stands out as one of the better looking cars.

The clip is heavily desaturated and has a blueish tint to it, which is usually a filter applied to suggest a rather bleak atmosphere. Why would Faraday Future want to place its vehicle in an inhospitable environment is beyond us, but strangely enough, it doesn't hurt the overall appeal of the clip.

We hope that bumper footage isn't meant to showcase the vehicle's lane keeping feature because if it is, we predict a lot of activity at whatever workshops Faraday Future will repair its cars. It most definitely isn't, though, but it still feels weird to see a vehicle following the road divider.

There's even a Tesla Model S making a cameo. The electric sedan can be seen in one of the urban shots in the background, which is probably where it belongs if you ask anybody at Faraday Future. We'd like to remind you that the startup plans to equip the FF 91 with a 130 kWh battery pack and a motor layout capable of delivering 1,050 horsepower, meaning it should surpass everything currently on the market regarding dynamic performance and maybe even maximum range.

But a closer look at the clip tells us that it must have been pretty cheap to make, which isn't at all surprising considering Faraday Future is behind on its bills for the "$1 billion factory" it wants to build and has a few supplier lawsuits on its hands, to list but a few of its woes.

At the end of the day, this clip doesn't bring the production of the FF 91 any closer to reality. It just shows us that the company has not given up and it is still hoping to attract the funding necessary to go through with it. 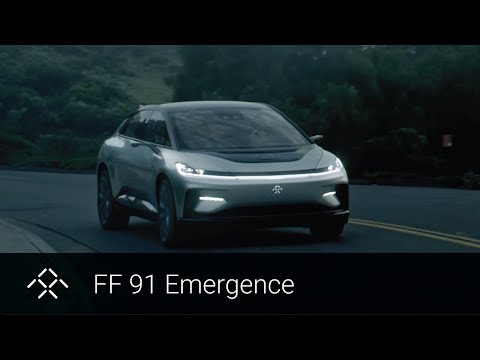