2 The Tesla Roadster II Feels like an Extreme Amusement Ride

Fancy the New Tesla Roadster? Learn How to Clear the Biggest Hurdle: the Wife

Having a passion for something is a great way to keep your mind off the more bleak aspects of life, and partners usually encourage each other to follow theirs. However, when said passion involves $200,000 cars, that might prove not to be the case.
1 photo
Buying expensive vehicles has always been tricky for some people who were lucky enough to find their better halves, but unlucky enough for them not to share their enthusiasm for things with four wheels. It's hard explaining why you would pay half what your house is worth on something that simply drives you around to someone for whom cars are just that: a means of transportation.

Electric cars have made things even more difficult as they pose significant disadvantages. And when they cost well over $100,000, like the Tesla Model S P100D that everyone wants, convincing your spouse it's a good idea might be nigh on impossible.

Well, Tesla has just introduced the second-gen Roadster prototype, and it's absolutely crazy. All EV fans will want one and even some of the skeptics might have to reconsider their stance if the sports car's specs make it into the final product.

However, it also comes with an estimated price tag of $200,000 ($250,000 for the Founders' Edition), so good luck explaining your partner why you should start saving up for 2020 when this thing is supposed to be available.

Luckily, one Tesla-owning wife who's been on the other side released this clip just five days before the Semi and Roadster unveil. Her premonitory skills proved spot-on as these "five best tips for how to convince your wife to buy a Tesla" couldn't have come at a better time.

You should probably watch the video to get the whole drill, but just in case you're in a rush, here's the quick rundown. First of all, you should watch something inspiring to let her know it's not just a car you're spending the family's hard-earned cash, but something greater than that: an idea.

The second one is a bit of a no-brainer: make sure you time your proposal right. You should avoid being too obvious, though, so don't give her a gift and then pop the question immediately after. Third is plan a date near a Tesla showroom so you can go for a test drive afterward. Just make sure you keep her off the wine if you chose to go to a restaurant.

Number four will require some of the maths skills you picked up in high school as you should put all costs on paper and prove that EVs - or Teslas, in this case - make financial sense as well. Finally, number five: Teslas are safe. If your partner is looking after the family's safety, then there's no better car to be in. That might hamper your Roadster II argument, but maybe it'll set a new crash-worthiness record among sports cars, who knows? 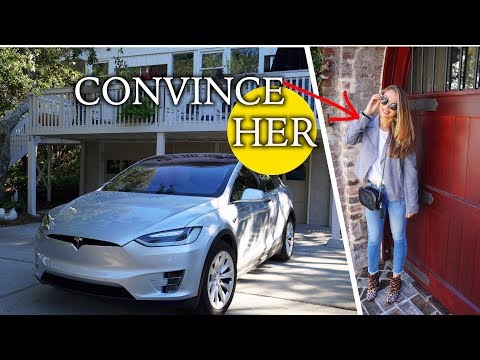