5 GlamBOX: In This Rustic Tiny House, the Master Bed Is the Only One With Wheels
Car video reviews:
Driven

Social media is filled with inspirational stories and motivational quotes. Whether you need a pick-me-up for your self-esteem or some kind of support for a life-changing decision, you can probably find it there. As long as you know how to sift through the lies and glamorized half-truths.

Family With 2 Kids Lives Full-Time on the Road, in Awesome Airstream Tiny Home

The tiny house movement has been around since the early aughts, and the RV lifestyle long before that. However, the #vanlife inspirational trend has only picked up considerable steam over the past couple of years, when the 2020 international health crisis put a damper on travel plans and brought about the work-from-home possibility.

We all know that social media is not reality. But even with this knowledge, it’s not difficult to fall into the #vanlife trap, where everything is presented as a hippie modern tale of intentional and alternative living, sunny beaches and vegan food, non-stop leisure, morning yoga classes, and exactly zero stress. A sugar-coated version of what’s living on the road is like.

The Nascimentos aim to be the voice of reason, if you will, helping and inspiring others through their example to pursue the vanlife dream. They’ve been living on the road full-time for almost three years and, as of the time of press, have just returned from Baja, Mexico, and are heading to Alaska for the summer. They’re married couple Alexis and Steven, and their two kids Harvey and Levi, and Ruby the dog.

In 2019, Alexis and Steven decided to sell everything they owned in order to finance their next rig. At the time, as they explain in the video at the bottom of the page, they’d already been spending lots of time as “weekend warriors” in their Sprinter van. They continued to use the van even after the birth of the boys, but it wasn’t before long that the kids outgrew that space and they had to start looking for a bigger alternative. They initially thought of giving vanlife a try for a year – and are now three years into it.

On their social media, Never Say Someday, they detailed their struggle to find just the right option for them, and how much assistance and support they got from the community of fellow RVers. They eventually settled for a 2017 Airstream Flying Cloud trailer and a 2021 RAM 2500 diesel truck; they spent $78,000 on the Airstream and got the truck at “a good deal” in a Nevada dealership just as they were starting to lose hope they might ever get one for a decent price.

The dual-axle Airstream has been lifted 3 inches (7.6 cm) to offer a bit more clearance for the tanks underneath. When they reach terrain where they can’t take the Airstream, the park it at an RV park (they’re not much into boondocking), and use the RAM, which has been recently fitted with a pop-up tent for shorter stays. The truck and trailer combo is what works for them right now, and they’re honest about the challenges, hardships and downfalls of life on the road, just as they happily share its many joys.

Inside, the Airstream is a proper tiny house, which should hardly come as a surprise to anyone who knows anything about the iconic, shiny, bullet-shaped trailers. It offers sleeping for up to six people and, with some exceptions, it has proven to be the perfect family RV so far. There’s a couch that can sleep two in the living area, a dinette that converts into the kids’ bed at night, a small kitchen, a bathroom, and a master bedroom.

Compared to their previous van, the Airstream is almost luxurious, especially since it has a shower, small as it might be. There’s also a separate dry bathroom that’s big enough to fit two, while other features they’ve come to love include the full-size Dometic fridge-freezer that can hold up to four weeks’ worth of food, the large awning outside that allows them to expand their living space, and the fact that they can still have company over for the night.

The rig is made to allow them to go off-grid if they want to. Steven mentions the added solar panels on the roof (300 watts of solar) and the upgraded Li-Ion 200 aH battery. On social media, he also says they rely on a Jackery Solar Generator 1500 when they’re off the grid.

In total, the Airstream offers them 188 square feet (17.5 square meters) of living space, which is more than enough for two adults, two children and one pooch. They use the storage space inside the trailer for their belongings, but they also carry much of the heavier stuff in the bed of the truck.

The family believes that every traveler needs their own solution for the perfect RV, and they want to help as many as they can to find it. As Steve puts it, “the vehicle you’re in is just a tool to get you out there. The point is to go out there and explore.” Words to remember. And live by. 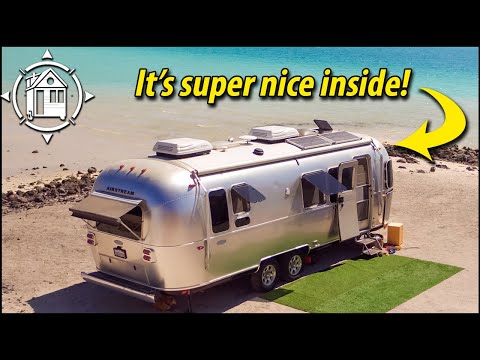