1 Japanese-Made Drone Is a Glowing Balloon Propelled by Ultrasonic Vibrations, Has No Blades

The notion that kerosene will be fully replaced by hydrogen one day, when all commercial aircraft will be emissions-free, is still highly controversial. Even though big names in the aerospace industry are investing heavily in hydrogen technology, some still see it as an unlikely solution for large-scale operations. But there are even bolder projects out there, like solar-powered aircraft.
14 photos

The idea of a flying vehicle that can drop fuel altogether, whether it be conventional or sustainable, and not require any refueling stops while still being capable of top-level performance is undoubtedly appealing. Some companies are already testing it on drones, as it seems much more feasible for small, unmanned flying vehicles to use exclusively solar energy as their source of power. But can large aircraft the size of commercial airliners be able to do the same?

Product designers such as Laszlo Nemeth from Lasky Design seem to think so. Of course, designers have the advantage of being able to let their imagination fly, unbothered by the technical aspects. Falcon Solar is a visually-impressive concept, but the lack of details when it comes to performance seems to keep it in a purely theoretical real.

The aircraft concept’s attention-grabbing shape is inspired, as its name suggest, by birds of prey. “Even nowadays, nature's iteration of shapes can be a good inspiration for design and help development with almost perfectly harmonious proportions such as golden ratio,” says Nemeth. The wings that are curved upwards seem much larger compared to the streamlined body, with a sharp tip. The designer explains that the fuselage provides a large area for solar panels (in addition to the massive wings) while also generating “significant lift.”

The Falcon Solar looks like a futuristic technology wonder, but as Yanko Design reports, it doesn’t seem to have rudders or stabilizers (indispensable components), and its cabin also seems very compact. So it’s hard to say how the Falcon Solar would function in the real world. Still, its innovative shape could be an inspiration for an entirely new breed of commercial airplanes in the distant future. 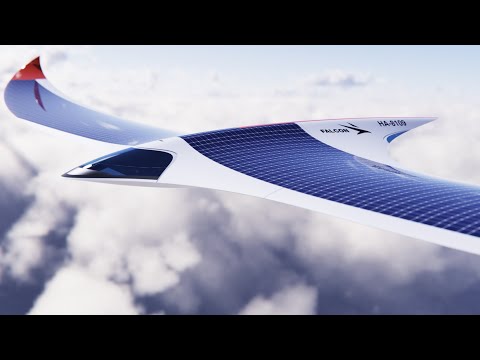