5 Tesla P85D Races a BMW i8 from a Standing and Rolling Start
Car video reviews:
Coverstory

The world is filled with all sorts of unfairness and sometimes, it’s up to us to do so. Will you step up when the time comes, though? Yeah, the answer without having to actually deal with such a situation can seem easy to say but once the chips are down, things tend to go in a different direction.
1 photo
However, this time is not one of those tricky situations. This time we’re here just to observe and pass judgement. What we’re looking at then is a drag race between a Porsche 911 GT3 fitted with the super-fast 7-speed PDK gearbox going up against a BMW F10 M5. There’s a twist involved too.

The BMW is tuned whereas the Porsche is riding completely stock. That’s one of those unfair contests we’ve seen online. Or is it?

In stock guises, these two cars belong to two entirely different leagues. While the Porsche is a finely-tuned track tool that will demolish a lot of cars in performance and driving excitement, the BMW is a massive sedan, a comfy four-seater for the family that wants to cruise at triple digit speeds on the Autobahn. Basically, they couldn’t be more different.

Even looking at the specs confirms it, with the GT3 using a 3.8-liter 6-cylinder engine without any of this modern-day forced induction madness but good for 475 HP and 440 Nm (324 lb-ft) of torque. Sure, those figures might pale in comparison to the 560 HP and 680 Nm (501 lb-ft) of torque of the stock M5 but then again, the weight of the BMW comes in to ‘compensate’.

That’s because the Porsche tips the scale at 1,430 kg (3,153 lbs) while the BMW is about half a ton heavier. The 0-62 times also confirm that in stock guise this battle wouldn’t be fair, with the 911 having a 3.5-second dash on its side while the BMW is nearly 1 full second slower.

Therefore, the car in the video below has been tuned to keep up with the likes of this Porsche and is now featuring a new exhaust, a Stage 1 ECU tune and a new intake from Dinan. The result? Well, that can be observed below but the question we want you to answer goes like this: is this race fair or not considering that in stock guise the BMW wouldn’t have stood a chance?

PS: the Porsche driver could easily run for the title of dad of the year. You'll see why! 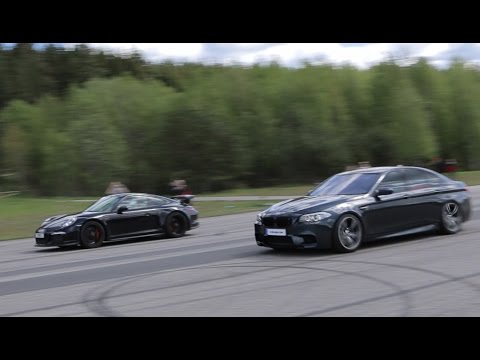